It ended up being quite a trek on Monday.  After two trains, we missed the first bus, and succeeded to get lost on the next one.  This was before the long uphill walk... it was unseasonably warm.  After reaching the top of the hill a Black Redstart was a great distraction, but I could wait no longer.  Continuing along the road we looked out for the unmissable signs of a twitch, the usual giveaway being thousands of pounds of equipment pointing to a hedge.  This was no exception, a long line of birders and too many prime lenses to count.  After joining the throng, it wasn't long before I had a glimpse of my goal, a Red-breasted Flycatcher.  Is it pointless to tell you where I was?  Probably, this is likely the most talked about bird at the moment.  No surprise, this Sibe is a real stunner.  It's rare for a Red-breasted Flycatcher to turn up in England (or the UK for that matter) with quite as red a breast. It's almost as extensive as a Robin! If, despite all the posts and pictures you have missed news of this beauty, it's been at Beachy Head.
It showed well on and off for the thirty or so of us there, favouring a perch at the front of the bush.  Every time it appeared it would be greeted to a symphony of camera shutters - The music of twitching. 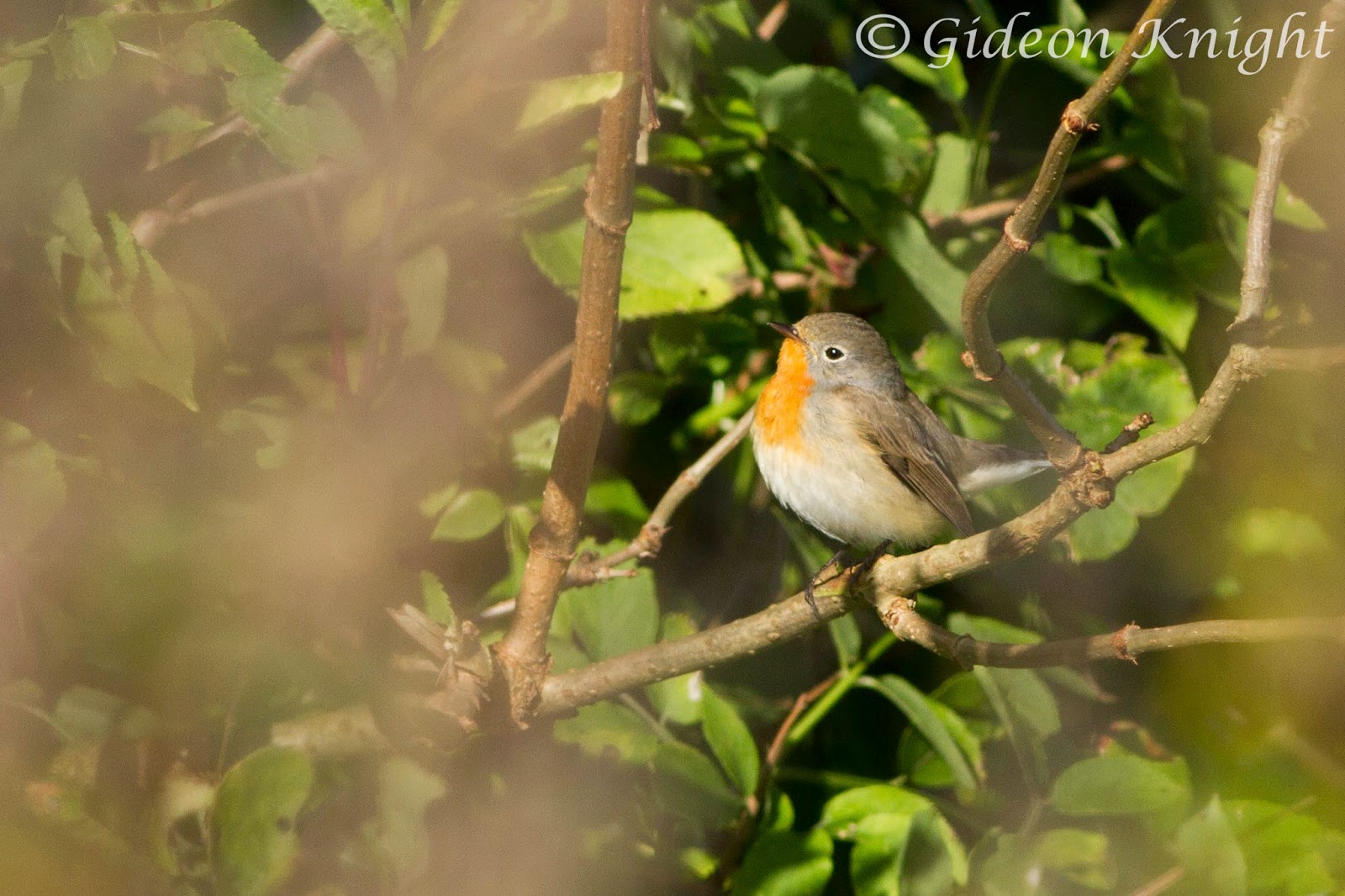 Although the number's ever growing, I still haven't been to that many twitches, but of the 'few' I have attended this was nearly the biggest, topped only by the Short-Toed Eagle.  Surprising really, considering RBF's aren't even classed as a BOU rarity. Again though, it looks amazing.
I could have spent all day watching it, but alas, it could not happen.  It wasn't showing as well and time pressed on, although there was time for a quick stop to look for the Black Redstart.  She showed quite well on the roofs of the Countryside Centre with a Pied Wagtail. 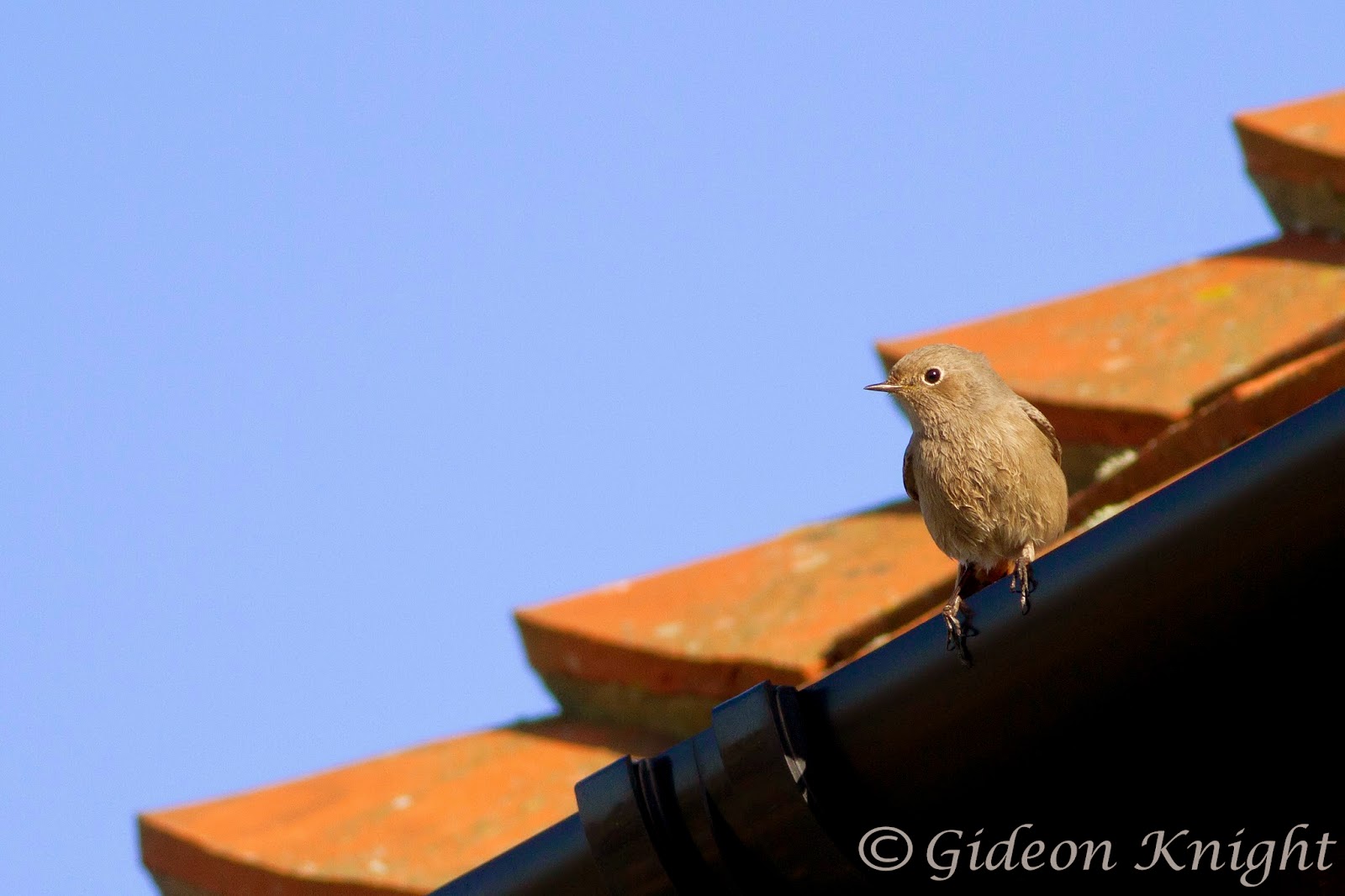 A much less eventful trip home ended a great day, two Sibes in four days isn't that bad...
Posted by Early Worm at 09:16 No comments:

This Autumn has been filled with Yellow-browed Warblers, none of which had been seen by me. In my defence there had been few locally, well, none. They are somewhat of a London rarity, with the majority on the East coast. At the weekend, with one in Regent's Park for a couple of days, I thought it a good opportunity to join in with the Autumn fun. The warbler thought otherwise and... I dipped.  Must I concede and wait until next year?  I'd hoped not. Fast-forward to Friday, and it was still there after eight days.  What to do?  You guessed it.  After a 'joyous' hour on public transport it was into the bustling crowds of Baker Street, past the house of the great detective, before the relative calm of the park. A group of birders were already there, the little warbler wasn't... yet.  Although it had been seen, it was being elusive and not very vocal. With a bird of its miniature proportions it was going to be tricky to get.  But that's the fun of birding, isn't it? The wait was actually not too long, before we were called over to catch the silhouette of a YBW.  It vanished for a few minutes, before I managed to relocate it in a dense thicket.  This time it showed off (however briefly) its strongly marked wingbar and eyebrow. A stunning little Siberian migrant.  It even called a couple of times.. what a gem!   Autumn birding's now complete.
It didn't really pose for its shot, can you tell? 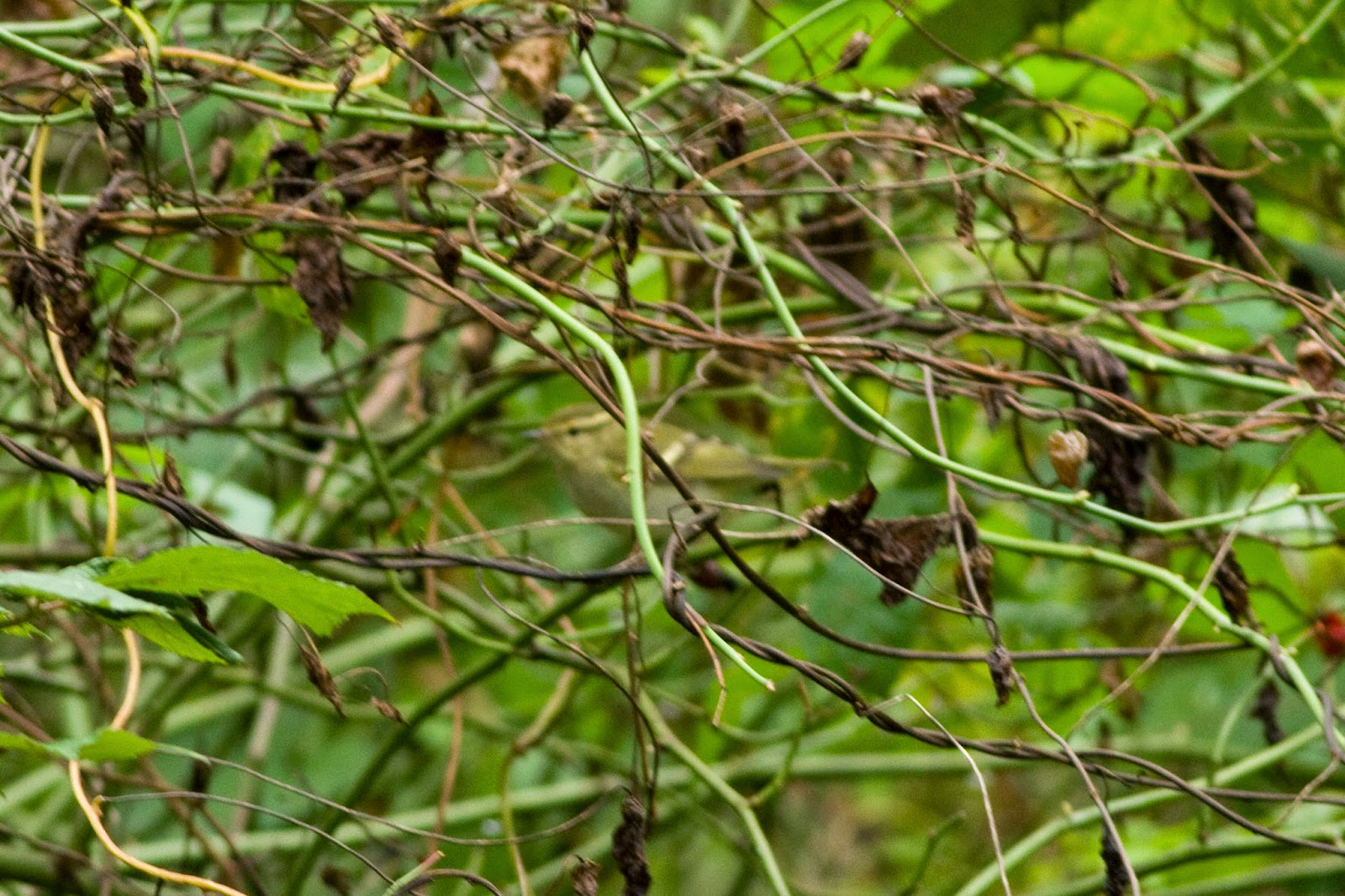 Oh, in other news I've upgraded my lens (so this shot really isn't a good start), but more on that later.  I'll just leave you with this Heron... 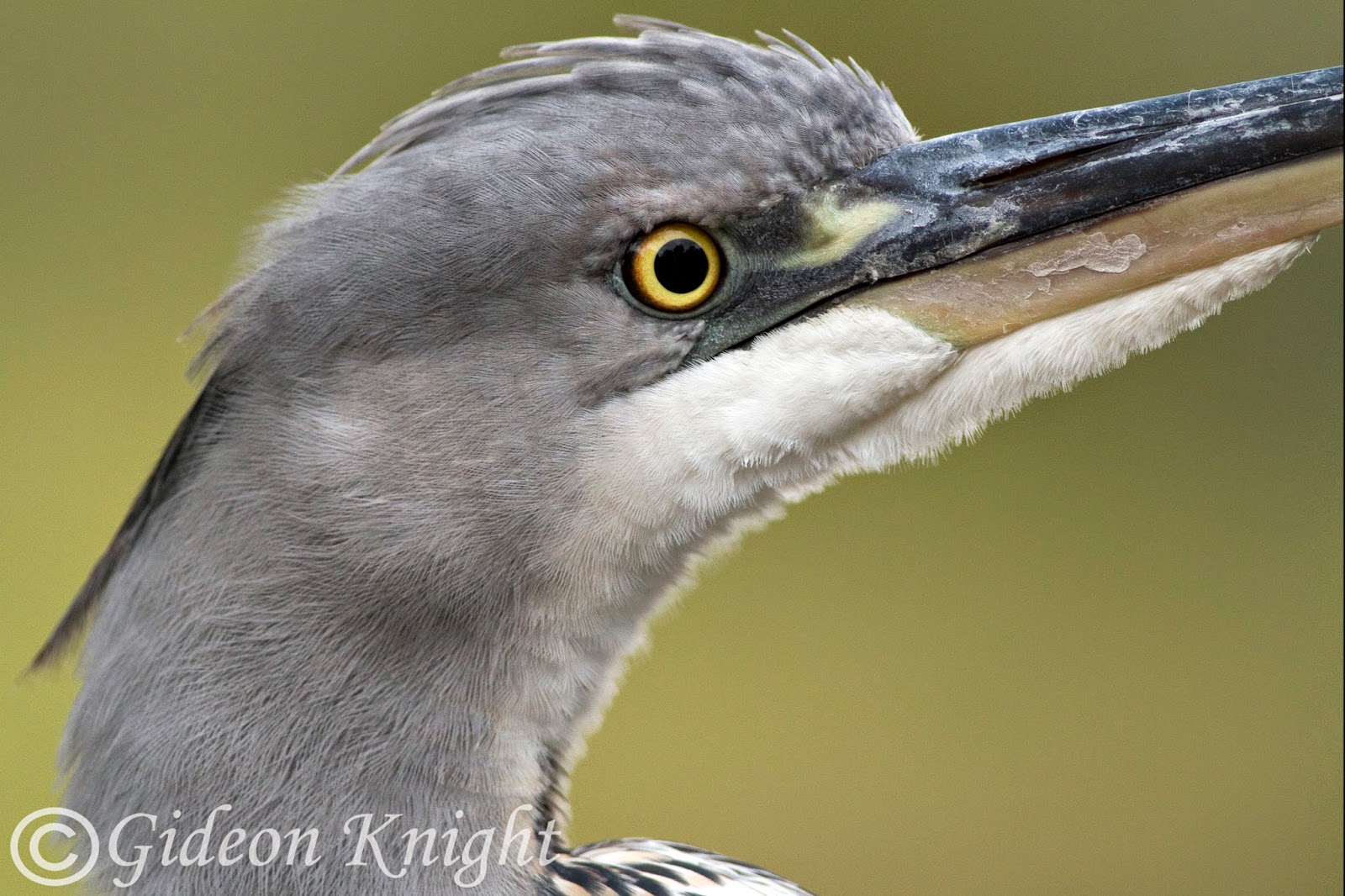 Bring out the Bunting

I was just packed and ready to hit the patch this morning, when a well timed check of twitter brought some surprising news - Lapland Bunting at Wanstead Flats! Showing in grass near Alexandra Pond.  Well... I didn't go to the patch.  With our direction turned to Wanstead we made haste. A twenty minute walk later and I realised this wasn't going to be all that easy.  There was really rather a large amount of grass. Long, long grass.  After rather pointlessly staring into the grass, a bird started circling, expecting a mipit I pointed the camera its way.  I'm not sure I've ever been more delighted to be wrong - I was watching a Lapland Bunting!  It circled a few more times then dropped down into the middle of the field.  Buzzing with excitement we joined another birder and again, began hopelessly searching for it in the grass. And so progressed the afternoon, with a couple more brief flight views of this delightful little bird.  There ended up being seven of us looking for it, yet still we could not pin its location on the ground. With little happening it ended up just being four of us left searching for it. Again we had brief views as it flew in the direction of the ditch it was originally reported from but alas, despite scrutiny of every patch of grass it could not be found. A master of disguise.
I'd seen it, and got a few poor shots of it in flight, that was good enough for me! So we started to leave, that's when it showed up darting down into the grass. Backtracking, we began again scanning the grass, but this time it paid dividends, I spotted it a few metres away. What a beautiful bird!  I managed to grab a couple of record shots before it flew off and began circling again calling as it went. It showed on the ground a couple more times before heading for the other side of the field.
Fantastic views of a fantastic bird, and my second lifer in less than twenty-four hours. Happy?  That sounds about right... 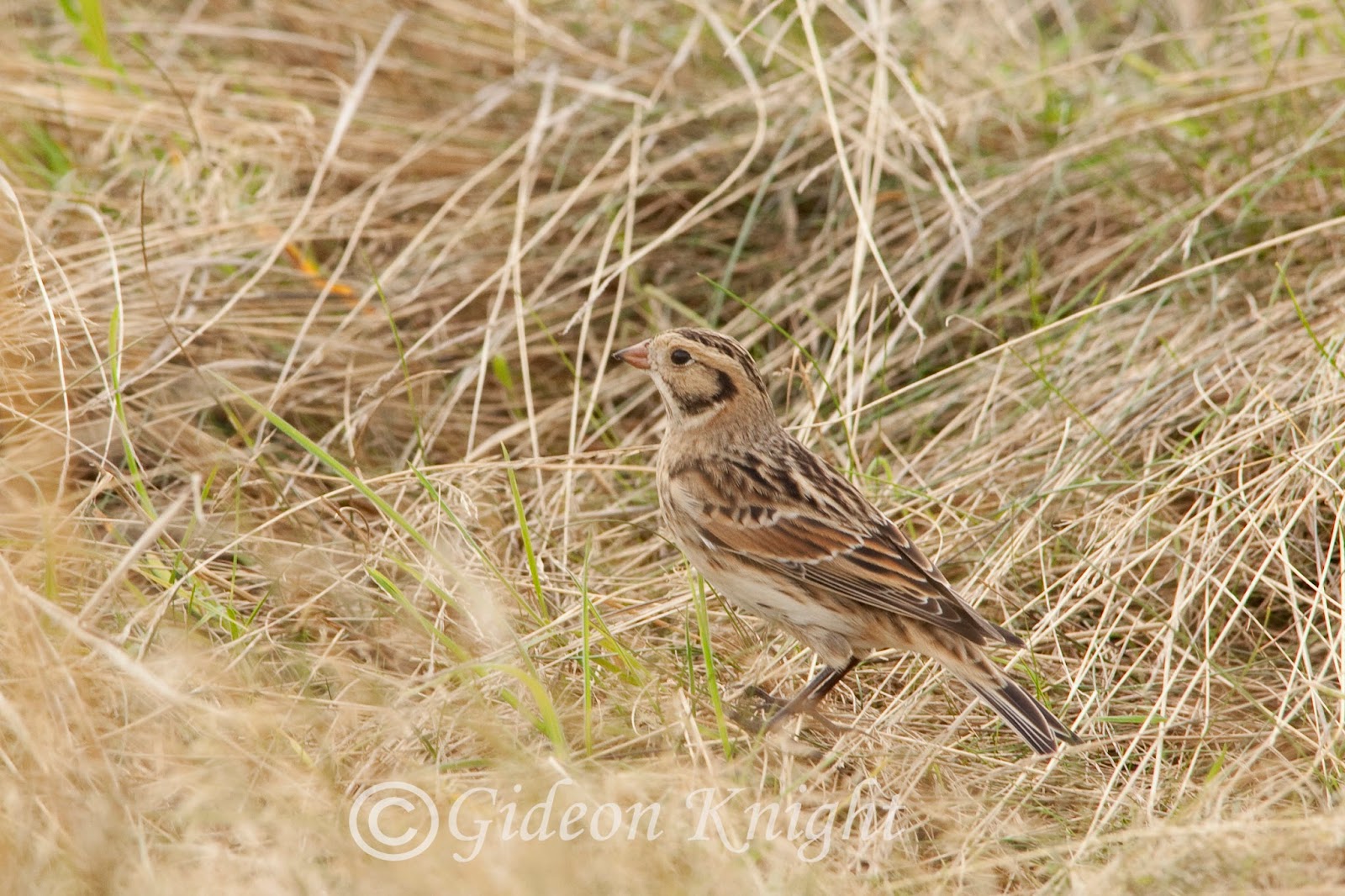 You may have noticed that recently, I haven't got much birding done.  I won't bore you with details about the reasons, of which there are many, simply, very little has been close enough.  And those that have been, well they don't tend to stick around.  This - you could say- unproductive time was broken today with a not so unproductive visit to Wanstead Flats.  I was on the search of Ring Ouzels, another rather common species which I somehow had previously missed, a 'tarts tick' if you will.  Just twenty minutes after arriving we had success.  There at the top of a bush was a male Ring Ouzel.  Distant, but the white crescent and black body showed nicely. It was joined by a second, and the two flew to a (thankfully) nearer bush. Not quite near enough to get anything more than a  record shot, but nonetheless they were pleasing views.  The Ouzels showed on and off in the same bush for the next hour or so for which we were there, among many false starts from Blackbirds who were sharing the same bush.
A lifer always makes a day productive, and although no, there was not a great deal else about, it was undeniably a success... 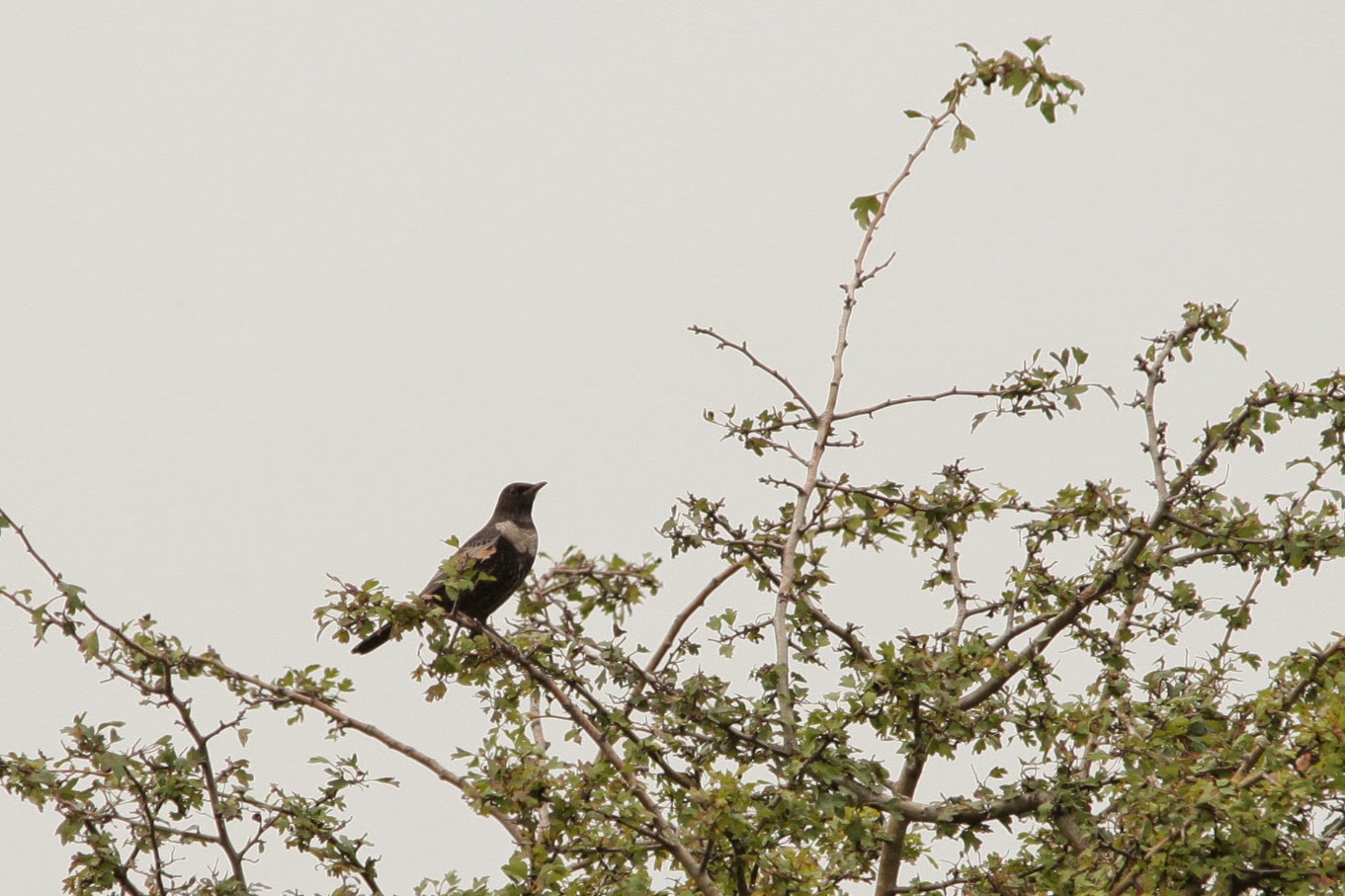 While some patch birders may have wild dreams and fantasies of rare birds gracing their patch, I don't set the bar that high.  No, my most sought after patch tick isn't the kind anyone else (at all) would be interested in, it's not even a local scarcity!  Even after two years of searching with great scrutiny I have been unable to find one.  Mock if you will, but this seemingly impossible tick, is Gadwall. Why would they not come to park?  Surely it's not that bad... I was surprised to say the least, when yesterday evening, at long last the search came to an end.  I gratefully came across three Gadwall on the main lake, sleeping on the far side from me, even from that distance the grey of the two males was distinctive. Patch lifer.
As I walked round to approach closer to the Gadwall, the distinctive call of a Kingfisher started, and there it  was, flying over the lake. By the time I had circled the lake I'd achieved some much better views of the Gadwall and the Kingfisher decided to show twice more. A treat for all the hours on the patch recently?   Such a satisfying find. 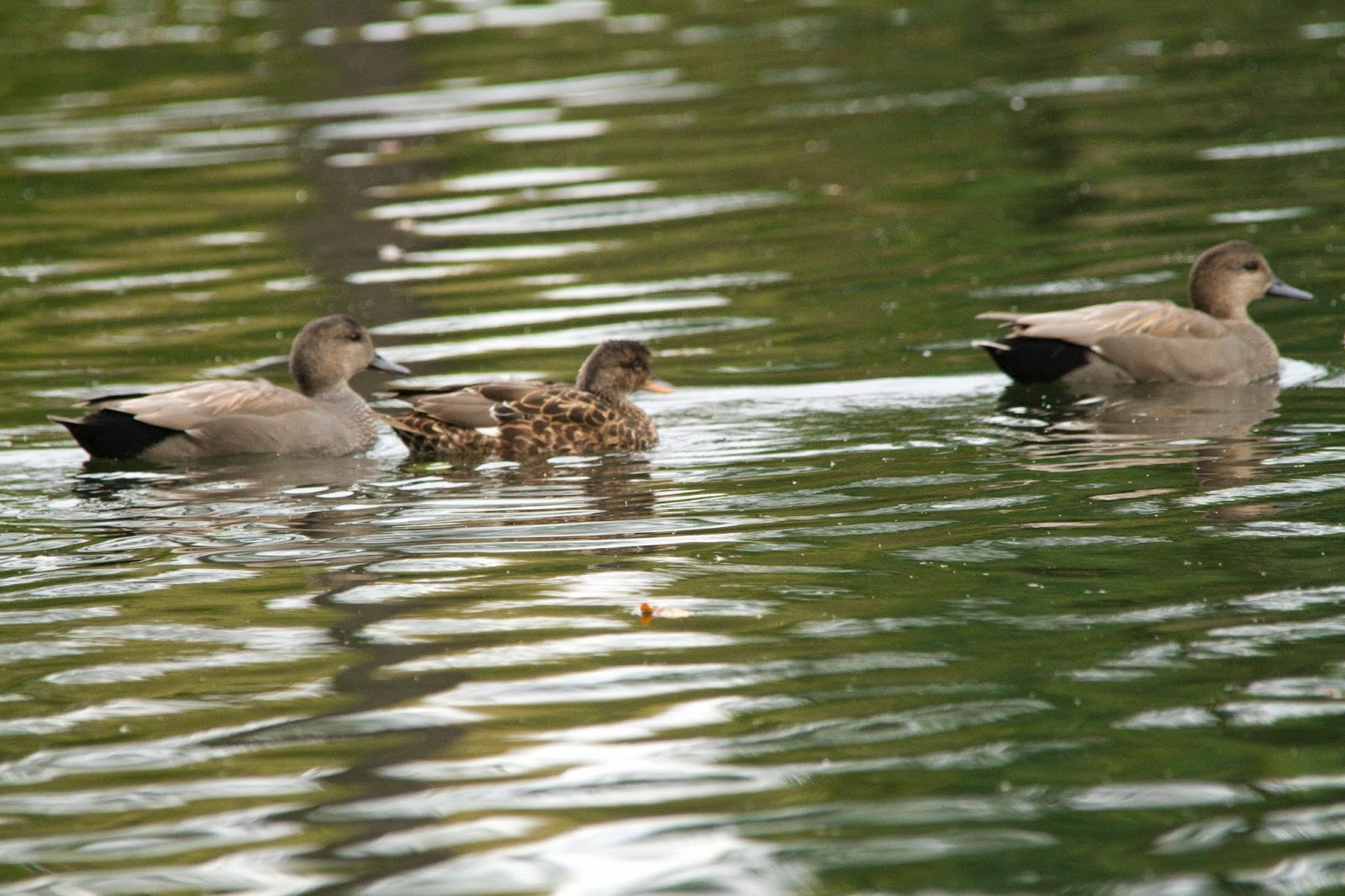 Heading to the patch this morning, the Gadwalls sadly were gone, and I was back to scanning the ducks for them without success.  Oh well. The next few hours were spent trying to accumulate a day list record for the patch, something I've been unable to beat for probably more than a year now, the current being thirty seven. And it certainly did seem on track for the first two hours, but then it got rather tricky.  the list was (typically) stuck at thirty seven. Would I have to leave on such tantalising a number?  It was just too much.  On the cusp of caving, and giving up, I was saved with the call of a Chiffchaff.  Which conveniently was followed by a view of the little bird.  Thirty eight!  As day-lists go, sure it's terrible.  But for the patch, it's pretty much fantastic.
Worth almost missing lunch... 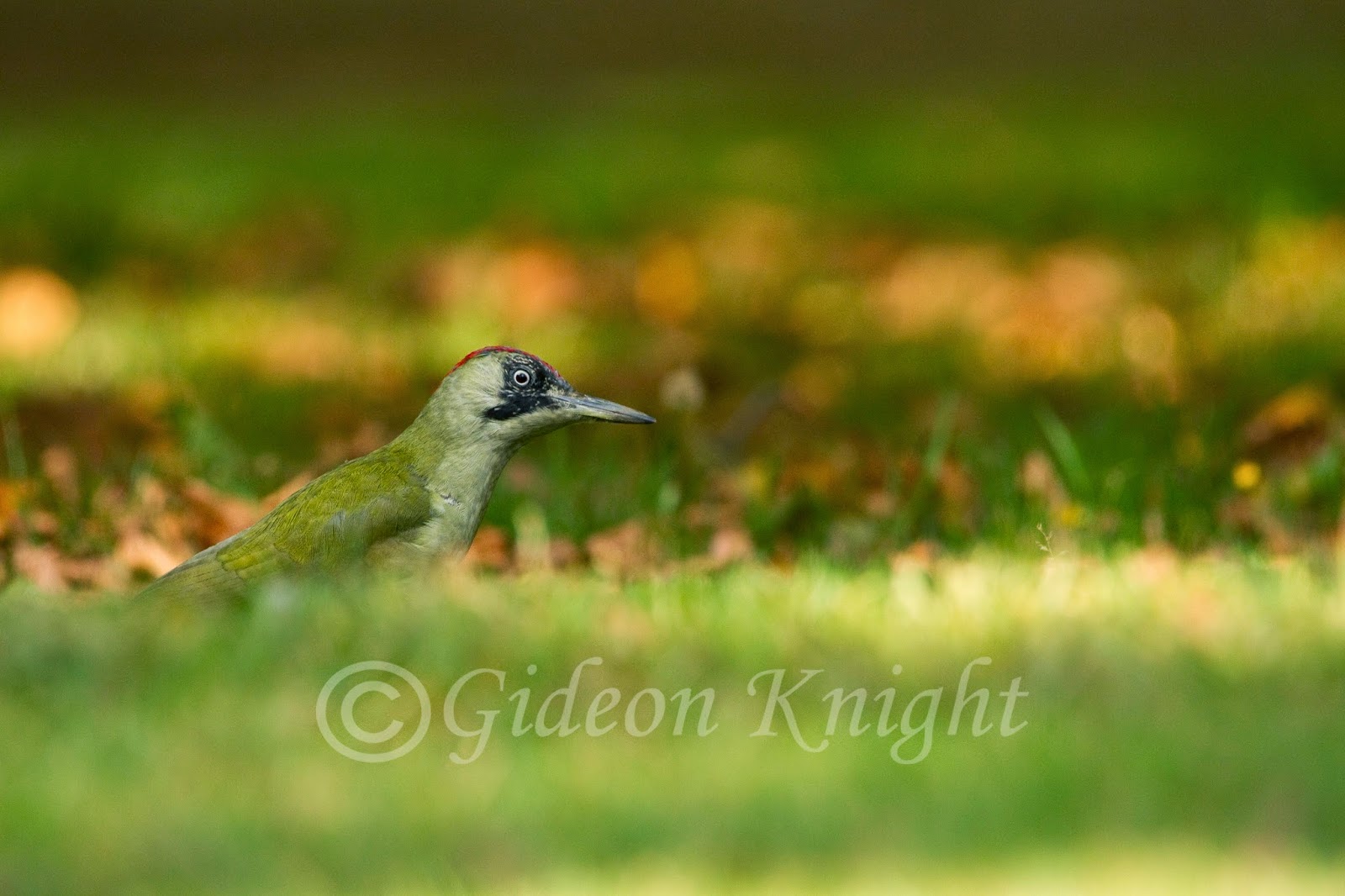