The United States of Ireland

Being the somewhat creature of habit that I am, last week I set of for my now seemingly annual February trip to Ireland. I think this will be the fourth year in a row now, so let's have a brief recap shall we? 2013 - Kumlien's Gull, and Greater Scaup. 2014 - King Eider, Ross's Gull, and loads of other great gulls. 2015 American Wigeon, Woodcock, and so much dipping, that having written a blog-post about it I deemed it too depressing to publish.
So how was 2016 going to fare? Well as long as I didn't dip three rarities - two of which were megas - in one day (why thank you 2015 visit), it couldn't be all that bad could it? I know what you're expecting, but fear not, for thankfully this isn't one of those times I follow a question like that up by calling myself 'naive', or perhaps even foolish. It actually wasn't that bad. You know what, I'd go so far as to say it was a pretty darn good trip.
The previous February forays for Irish birding all contained me dipping the Ring-necked Duck at Ross Castle. The bird had it in for me, I'm sure. How I offended it though I must assure you I do not know!  With a lingering expectancy to once again dip, strengthened by the flooding of most of the paths on site, we took a walk around the area on the 20th.
And my oh my, what was that amongst the Tufties on the lake? Could it be? Surely not... had I at last earned the right to see a Ring-necked Duck? Why yes, indeed it seemed so, for that certainly was a Ring-necked.  A stunning drake at that. 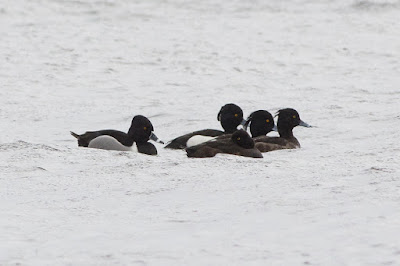 Ireland is an incredible country for gulls, every year seems to throw up a few rare laridae's, and this year was no exception, far from it, with two country-firsts: Vega and Glaucous-winged Gull. The closest England got was a Glaucous Gull, which had wings but was not winged. If you get my drift.
Thankfully the Glaucous-winged was a long stayer, and more fortunately its chosen position to 'long-stay' in, was only around an hour and twenty minute drive away. It would have been rude not to go, and I like to think that I have some manners. So... just to be polite, on the 22nd we went.
It took only a minute or two after I got out the car to successfully not dip. The grey primaries and distinct shawl standing out like a Glaucous-winged among Herring Gulls.
It took flight soon after, giving rather decent views as it went past. Look at those wings! 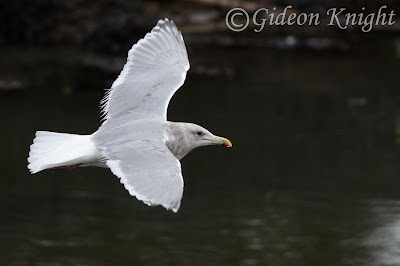 It spent a while preening on some rocks, giving good comparison views with a Herring Gull, before flying slightly into Castletownbere and flying between lamp-posts. Standard habitat for a 1st for the country to hang out in. 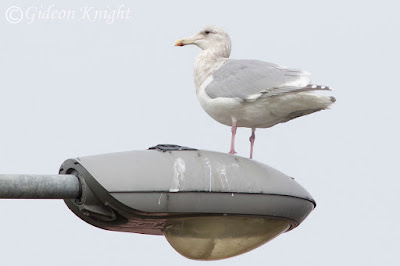 I've called it a first for the country a couple of times, but for accuracy's sake, until a decision's reached by the IRBC, this lovely gull has to bear the rather ugly title of 'putative'. Fingers crossed, for birders and the bird's sake alike, that title can be removed. 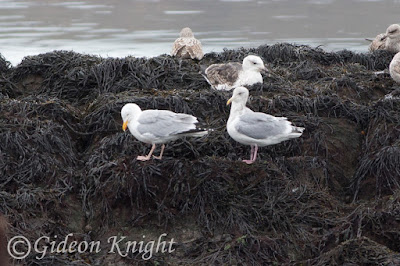 I didn't even make it twenty four hours before ticking another American rarity, this time the drake Black Duck at Baltimore. To clarify, the Ireland Baltimore, I have a slight suspicion American Black Duck aren't so rare in the American Baltimore. Not sure why, but I do.
It was a surprisingly distinctive bird, I'd managed to ID it before I even got out the car - and that definitely wasn't because it was the only thing around at the time that looked like a female Mallard. Definitely not.
It showed well for around five minutes, allowing great scope views before it flew around and around, and yep, once more around and then finally off to the north. They're actually pretty nice birds. 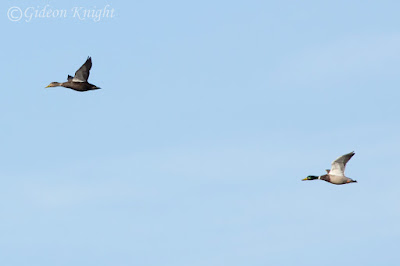 Having seen the Black Duck so quickly, and having had the bird leave a few minutes later, we still had some time, so we decided to go to White's Marsh for yet another long-stayer, and would you believe it, another American duck - Green-winged Teal.
This one actually required a bit of effort to find, effort which equated the repetitive scanning of the same small groups of Teal, to no success. Four Teal flying in brought us salvation, for amongst their numbers was a drake Teal who hadn't put his white line on the right way around, the Green-winged. I still can't believe we had to wait a whole fifteen minutes to see a bird. The impertinence! Still it was worth it to see a Teal with a vertical rather than horizontal stripe. 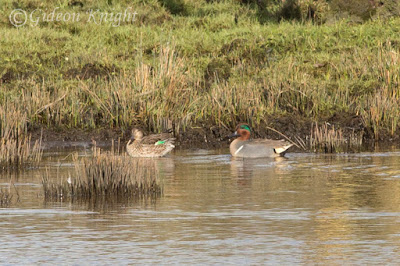 Four lifers that are as a majority, I believe, from America. I may have to recheck it was Baltimore Cork I was in, and not Maryland.
So, February 2016... From a non-birder's eyes, a Tufted Duck with paint on its bill, a Herring Gull that's been attacked with an eraser, a female Mallard, and a Teal whose line has wiggled the wrong way around. From a birder's point of view however, I'd say it may have been borderline awesome. Those were some superb birds!

Now that was a long weekend.
On Friday morning I headed up to Norfolk with Caleb, enduring a 'delightful' five hours or so on public transport.  How else would you like to spend your Friday than staring out the window of a coach for hours, miraculously not seeing any Pheasants? The prospect of Norfolk birding kept me going.  Just.
After arriving just outside Norwich, we headed out to meet up with around fifteen other Next Generation Birders, before we all embarked together for a weekend of birding and dipping in the great county of Norfolk.
Early(ish) Saturday morning we were greeted by a convoy of four cars, before heading to Flitcham to look for a Pallid Harrier. You can at least tick 'looked for' off the list, for that we did, but alas, looking did little good.  It was dip. My first of the year. Well you've got to start somewhere.
The Red-legged and Grey Partridge, Peregrine, Tree Sparrow, and large flocks of Linnet and Brambling made up for it though. Kind of. 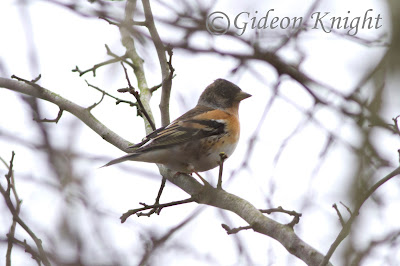 This was soon followed by another dip, the (according, not to me but to about 60% of the group, hideous) Golden Pheasant at Wolferton.
Thornham next, with a stop on the way where we 'saw' a Rough-legged Buzzard.  I'd rather have called it a silhouetted blob that was shaped like a Buzzard.
At Thornham I life-ticked a lovely small flock of Twite (I shall refrain from making a pun, playing on the fact Twite and quite sound similar). I also missed, what were apparently stunning views of Merlin (somehow still a lifer), which after one was seen at Flitcham while I was there that morning, was a little, umm, what's the word... saddening? Annoying? Peeving? They all roughly sum it up.
Titchwell after that, where we had Water Pipit, Common Scoter and all the expected waders and waterfowl - both Godwits, Knot, Goldeneye, it was a nice spot for birding!
The Lapland Buntings reported at Blakeney had us on yet another dip, but some conciliation came with another group of Twite. Seeing so many on a day, having never seen one before, was 'Twite' a nice surprise. Agh no, I'm so sorry, I tried my best, but it just had to be done. Please forgive me.
By now if was quite late in the day, so we finished the day's birding at a Hen Harrier roost where we had distant views of about six individuals, along with a probable Marsh Harrier and a stunning pair of Barn Owls! Oh, and another Merlin, which, would you believe it? I missed.
A lot of dips (the tale of my birding life) but still a very enjoyable day.  Next morning we had a little more success.
The day started with the magnificently terrifying beauty that comes so naturally to Glaucous Gulls, even when they're scrabbling for bread in a car park.  The 1st winter bird at Great Yarmouth gave stunning views. A lovely brute, if those words ever could work together.
There were one or two Med Gulls here who also held the their composure while sinking to the same bread-eating level. 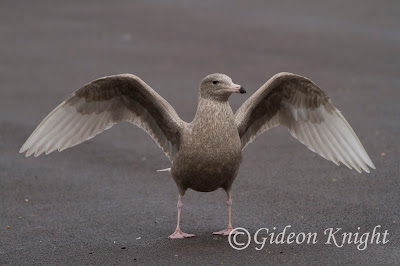 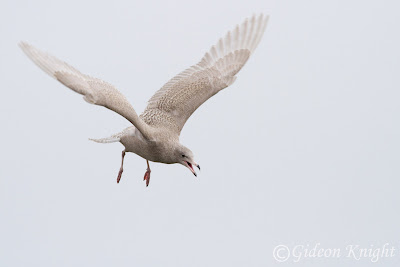 A drive through some muddy fields - which nearly got us stuck - gave good views of both Bewick's and Whooper Swans, with some further muddy fields (Norfolk has a lot of mud) providing a few thousand Pink-footed Geese. 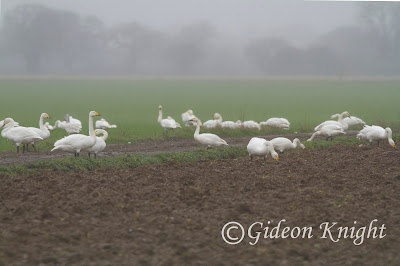 From there, we went to Braydon, where the islands in the river turned out not be made of mud (with how things had been going, that was surprising) but were comprised solidly of thousands upon thousands of Wigeon and Teal.  I don't think I've ever seen such a sheer number of birds as were in that river! Along with all the ducks, there were Snipe, Golden Plover and Spotted Redshank.
After a while of staring out at the river, most of the time in awe, with the rest being spent thinking of the effort involved to try and find a Green-winged Teal out there, I happened to glance behind us in time to see a pair of Bearded Tits at the front of the reed-bed.  Quite a good bird for the area, the male and female both gave amazing views as they fed, in the reeds.  Such stunners! 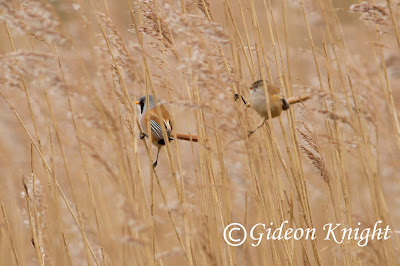 We finished up the weekend's birding in the 'Brecks', where we dipped Great-grey Shrike and Hawfinch, but did see a few Marsh Tit and a rather early bat at Lynford.
And thus we returned home, after over 300 miles of driving (big thanks to Jess for driving) 91 species seen, and all in all an awesome weekend with great company.
However, I do feel those three Merlin I missed will haunt me for a while to come...