A Trip to Tralee 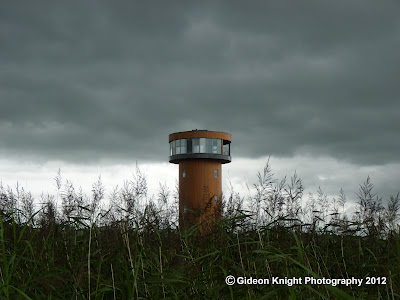 On the 26th we went to Tralee Bay Wetlands Centre and upon arrival were given a great talk about the wildlife around here. We then got taken out on a boat through the reeds where we saw two flying Grey Herons, a Cormorant, Mute Swans and flyover Goldfinches. And everyone seemed to decide that I am a Twitcher! Which I am not!

We then went up into their twenty metre high viewing tower. From there, my uncle Hugo spotted a male Pheasant and, in the distance on the bay (which was sadly way too far away to tell what all the birds were) I spotted: Oystercatchers, Lapwings, Curlew and Lesser black-backed Gull. On the way to one of the hides we came across a flock of Starlings and then a group of Goldfinches on some Thistles. On the way back from the hide I saw two Reed Buntings! We went back to the centre and then drove to a craft shop, and from there we went for a walk along the river where I saw a flock of what I think could be Knots in flight. I got one shot that's not very good, but if anyone could confirm it that would be great. If they are Knots, that would mean that in the year or so that I've been birdwatching I've seen 114 species! 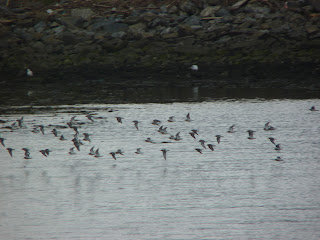 I've found out that I'm going to get back to England in early September, It will be interesting to see what the wildlife at Valentines Park will be like. The hundreds of Gulls that winter there might all be there!


On the 20th of August my Grandmother and I went for a walk along a river in Killarney. On the wall next to the river I saw a sign about Dippers and decided that that was the bird to find. We walked along the river for a while, and then we met an old man with a thick accent. From the little I could understand, he said that due to pollution there were less fish, and when the adult birds caught fish, they were so hungry that they would eat them themselves instead of feeding them to their chicks. This got me worried.

We walked even further and were on the verge of turning back when I noticed the white breast of a Dipper on the first bit of land in the river! It was fairly tame and allowed me to go to the edge of the river. It even stayed when a large dog jumped in the water! It stayed for over half an hour and was there when we left.

Also around the park, I saw three Sika Deer, and a Heron. 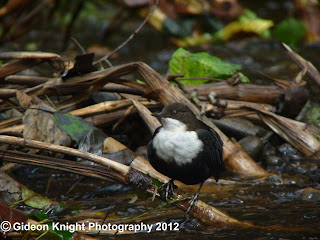 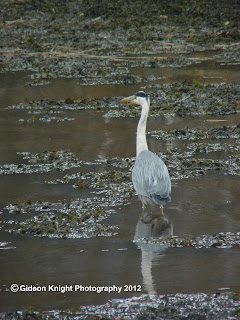 The weather here in Southern Ireland is typical, Rain, Rain and more Rain! Although we have had some bright spells. On the 13th, we went for a boat trip out on Kenmare bay to see the Seals. As I had never seen a seal before I was looking forward to the trip. While we were waiting for the boat, I counted five Grey Herons! Not long after the boat left I saw Common Terns diving for fish - one of them flew alongside the boat for a good while. I also saw a mystery Tern; it was all white except for a black line from the eye running to the back of its head, its feet were all black. Unfortunately, the photo is grainy....but any suggestions? 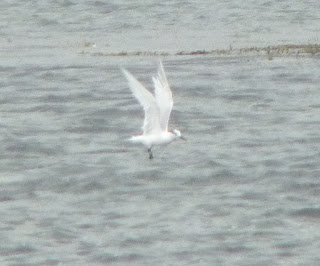 When we came up to the islands, I saw Cormorants, Oystercatchers, Herring Gull, Great Black-backed Gull, and a load of resting Terns. And yes I got some great views of Seals! I just wish the boat hadn't been tossing and turning so much, as it was hard to keep the camera in focus. 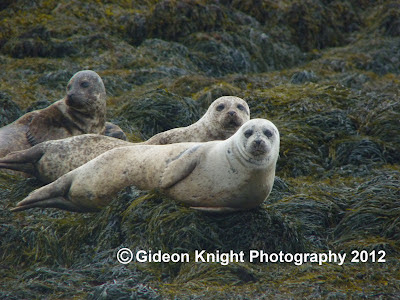 On the 15th, during lunch I spotted a bird on the horizon. As it came closer, I couldn't make out what it was until eventually I saw that it was a Sea Eagle! The weather was stormy and I noticed that the Eagle was flying backwards! 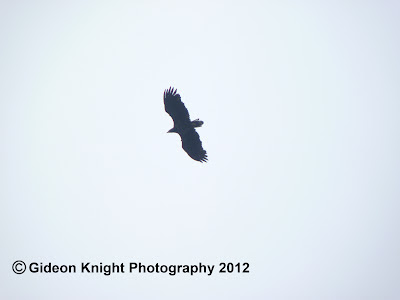 But possibly most exciting of all, I saw an Owl last night! I knew it was there, as my Grandmother had seen it several times. It was our third or fourth attempt to see it, so far we had had no luck. But as we were heading back to the house (getting midged to pieces), I decided we should go through the "Garden field" (where they grow their vegetables). I was watching a bat flitting about, when I noticed something flying out the corner of my eye, at first I didn't pay much attention, then it clicked, this was the owl! it disappeared behind the poly tunnels. I went and looked on the other side but couldn't see it.  I noticed something at the top of a post but in the low light I couldn't see what it was.  Just as I realised that it was the owl and raised my camera, it flew off! From what we know of previous sightings I'm pretty certain it is a Long-eared Owl! I will look for it again tonight, and, fingers crossed, get a picture!
Posted by Early Worm at 12:20 No comments:

Chuffed with a Chough!

I am on Holiday at my Grandmother's in the Irish countryside. The wildlife here in Ireland is impressive - Bullfinches are plentiful, Goldcrests are almost guaranteed and Wrens are everywhere. I saw two Ravens the other day as well! Yesterday my Auntie Addie took my Mother, Brother, Cousin and I to Derinane beach. Here I noticed a distant bird which had black on the end of its wings. I thought straight away that it was a Gannet, it was very distant but when it plunge-dived into the water my suspicions were confirmed. At one point I counted nine Gannets together! I was very pleased as they were the first I've seen! 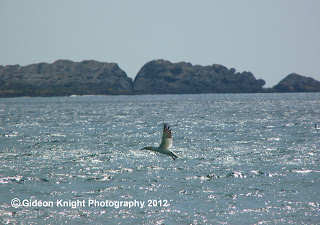 There was also a huge flock of birds, which I think were Cormorants as they had partially bent necks in flight, but they were too far away to rule out Shags.  We were walking back to the car when my Mother pointed out two black birds.  At first I couldn't see the beak, and as your not supposed to get Carrion crows here I was intrigued. As I went closer I saw they had orange beaks! They were Choughs! They were fairly tame and I could get within twenty feet of them. There are only about eight hundred in Ireland so I was chuffed to see one! 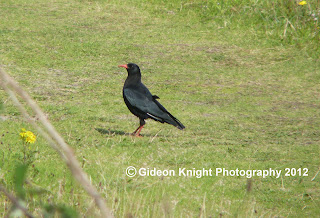