If you've invested in a lens it's important to protect it. The last thing you want to do is knock it and end up with a chip or a scratch.  Neoprene covers are a great way to prevent this, they provide a soft padded covering for your lens. Wildlife Watching Supplies' cover is made from sections of shock-absorbing 4mm thick water-proof neoprene. Your lens is effectively safe from knocks and scratches. It also offers fairly effective weatherproofing, but not complete -  there are small gaps between the neoprene sections. For full weather proofing I suggest their bag cover.
You can choose from a range of different patterns/colours for your cover, mine is in Advantage Timber camouflage, and is reversible to be Olive Green. 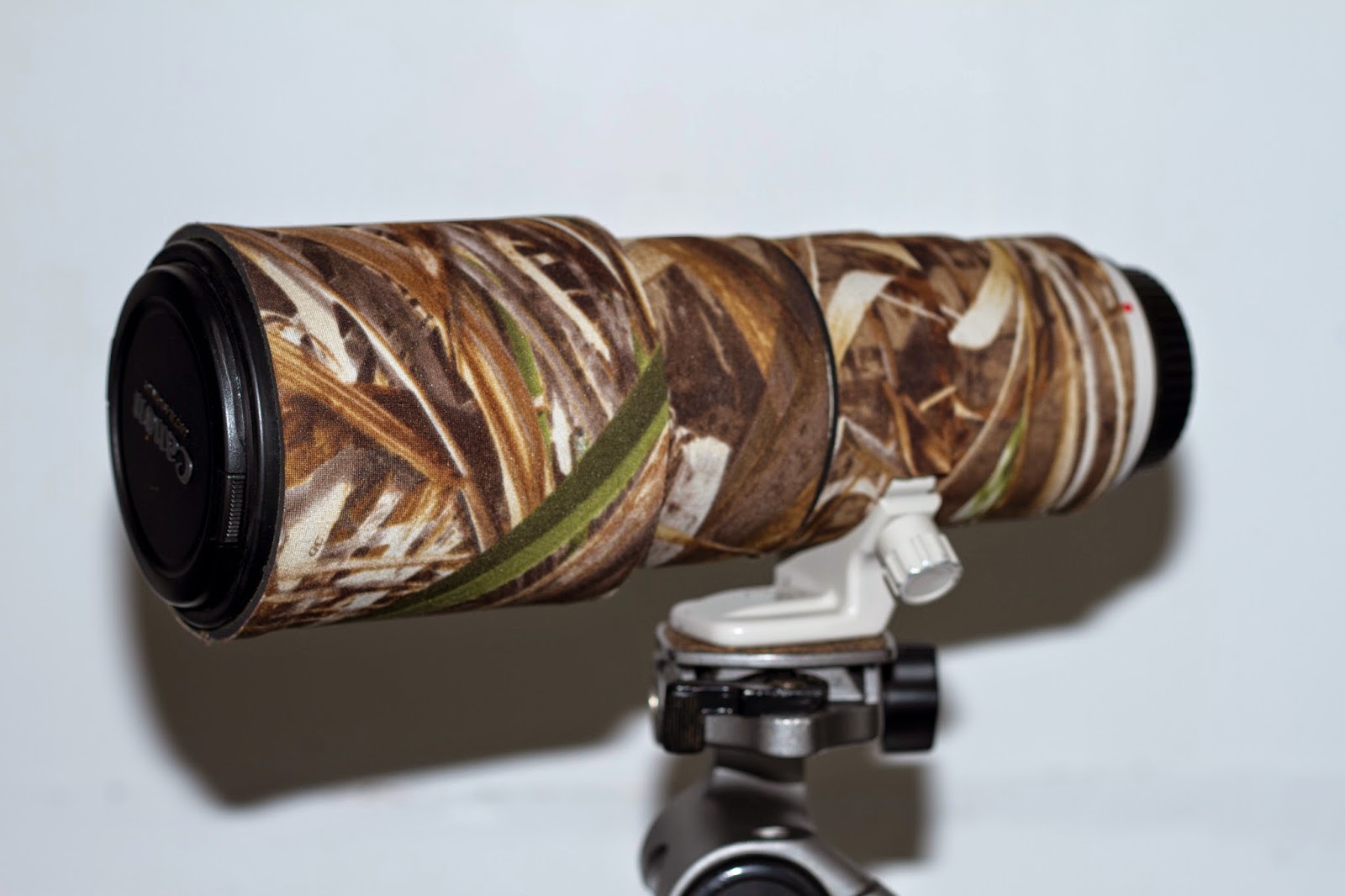 In the field, I find it makes it far more comfortable when holding your lens, the soft neoprene is certainly nicer than the metal! And it'll help prevent it overheating or even getting too cold if you're shooting in extreme environments.  My only qualm is that it can make operating switches on your lens slightly awkward.  By pulling back the section covering them it will make it a lot easier to use.
With lenses that zoom, or have retractable lens hoods, the set will contain a neoprene section with Velcro, so it can be strapped on when the lens is zoomed in or the hood extended, it can then be quickly and easily removed when you are finished. 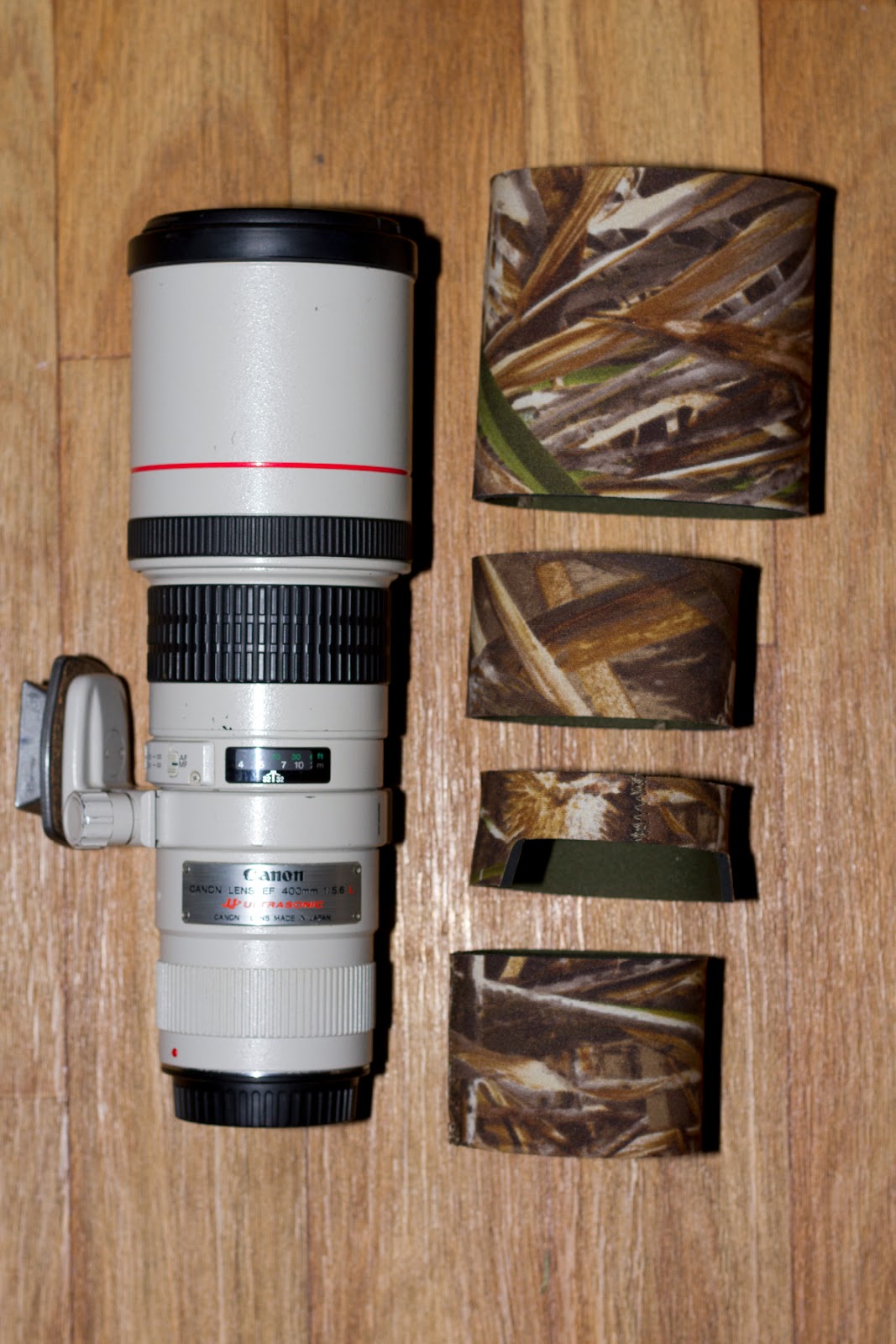 Whether or not you will definitely benefit from one of these can depend on what sort of photographer you are, if you're going to be out in all terrains and in all weather, then make sure you have one. Even if you aren't though, I would personally advise owning a cover for your lens, just for the peace of mind, and to keep it in top condition!
Posted by Early Worm at 11:57 No comments:

After my borderline disastrous pre-birthday birding, I subsequently turned fifteen.  To break in my new age, early the morning after my birthday I headed to Newhaven Harbour with Caleb for a spot of birding.  It wasn't an encouraging start after I missed the train I was intending to get.  Still, it was dark... So early enough.  With the sun coming up over the sea to start a clear day, I headed to the pier to look for Purple Sandpipers. They seem pretty much guaranteed here from December-March, so finding them usually isn't too hard, getting a shot on the other hand... not so easy.  They seem to favour feeding in the shade below the pier, bad angle, bad lighting, I'll leave it at that.  Always a joy to watch though!
There was a single Shag fishing just off the pier, and that was about it for the next hour or two, save countless flocks of finches.
While watching one of the groups of finches (in this case Greenfinch) feeding on a beach, we caught a glimpse of something larger with big wing-bars come down on the beach. Snow Bunting flashed to mind.  And after cautiously - and slightly excitedly I will admit - approaching where it had landed, yes!  There it was, Snow Bunting. A burst of shots, then we moved around and waited for it to come a bit closer.  Thankfully, it complied.  Need I tell you how the next four hours were spent?  Perhaps not, but I will. I feel I must, for it was rather incredible. Somehow this was my first Snow Bunt, funnily enough I dipped one here a couple of weeks ago.
I dread to think the amount of times I filled my memory cards - perhaps a reminder to clear them before I go out?  Employing the crawling-on-shingle approach, we managed at times to be within 10 foot of him (it was a male). The light was perhaps too harsh, and sure he seemed to have a love for distracting debris, but with views like that I'm not complaining... 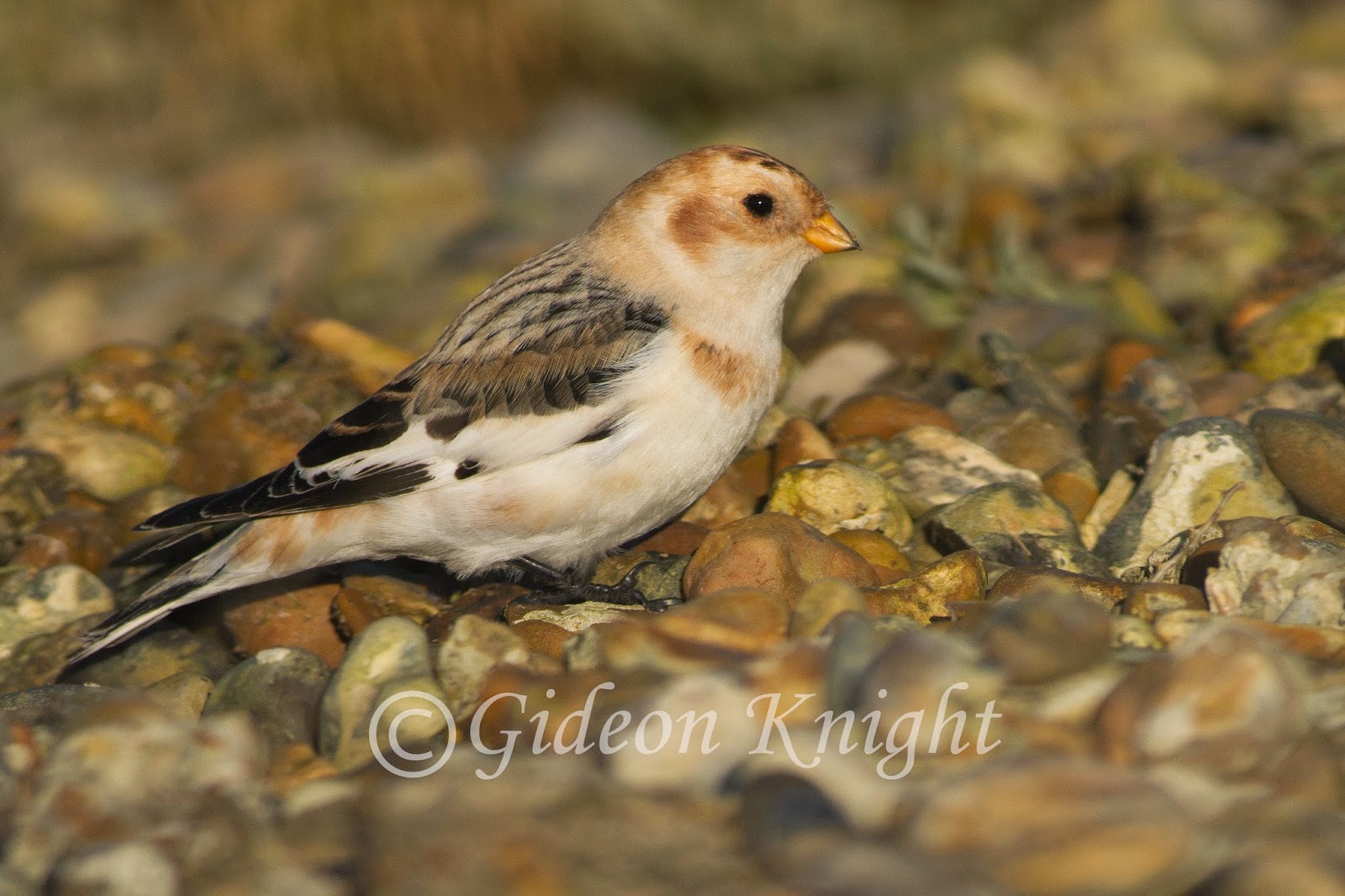 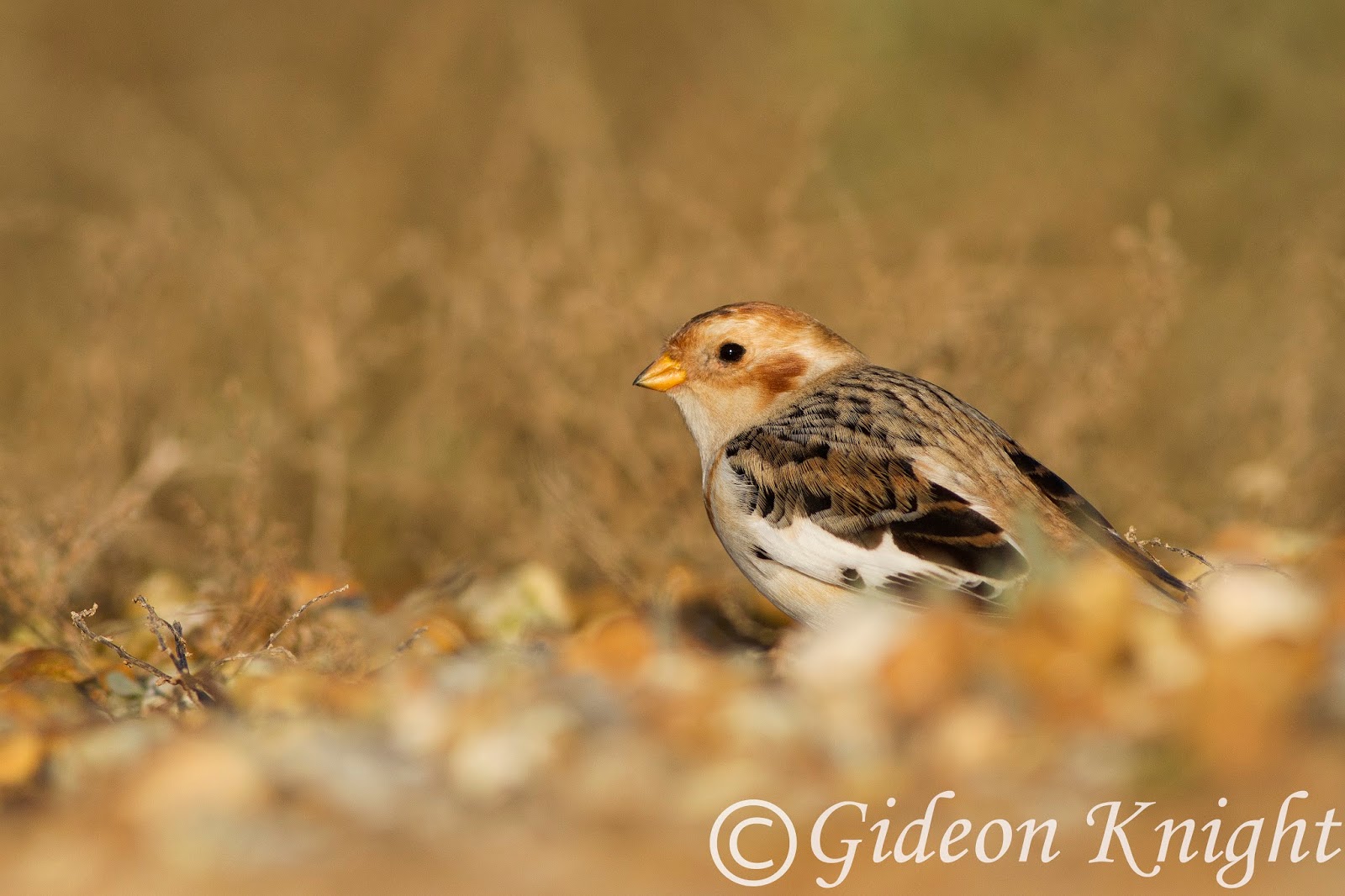 We watched him (with just a small break) until the sun was too low to photograph any more.  Such a great bird, the third to turn up on this stretch of coast in the last few weeks, but by far the the showiest! 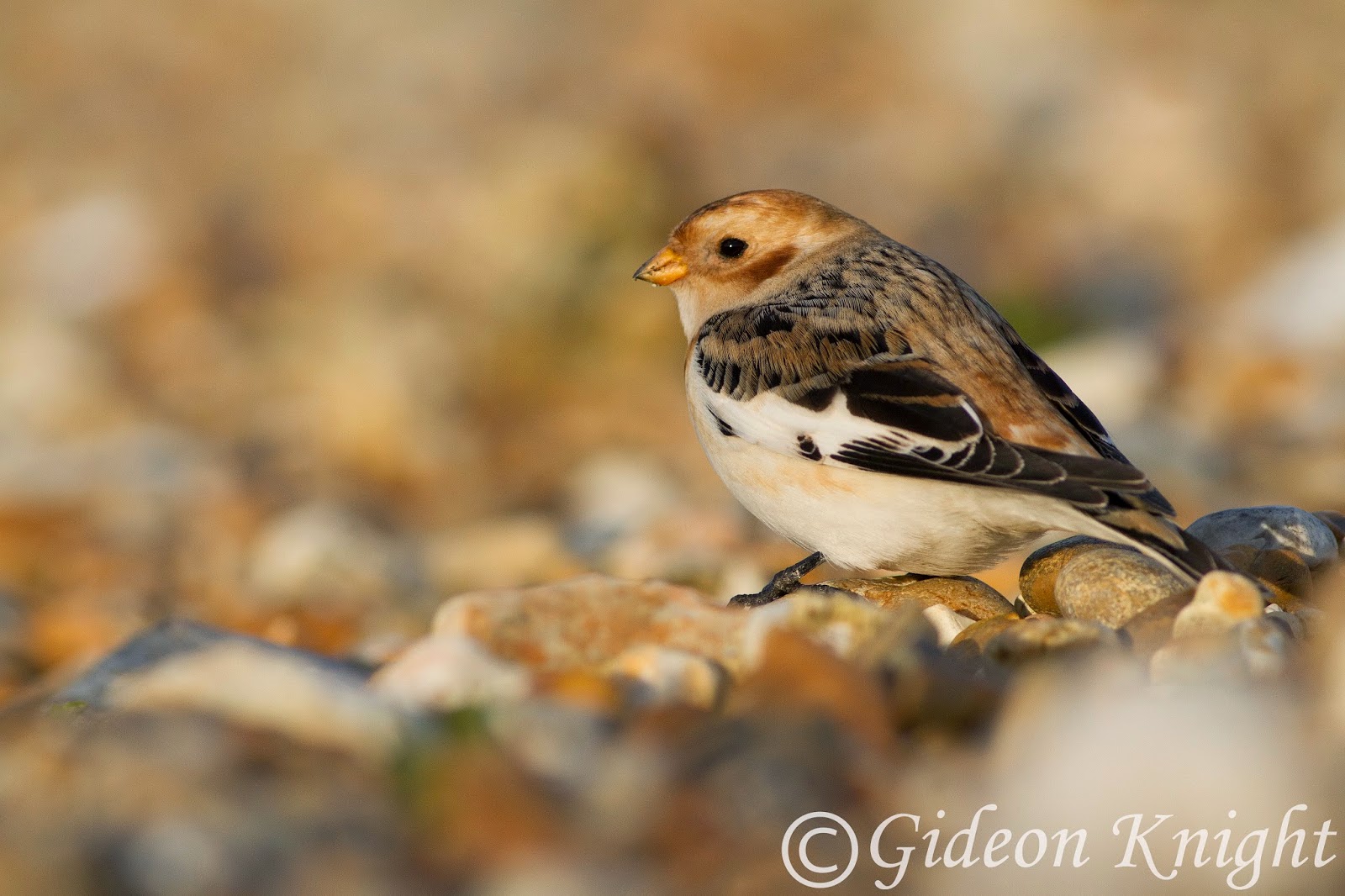 My yearly tradition of a birding trip in the days before my birthday came around again. A pre-sunrise start had us heading to Cambridge.  Why not try to join the Rough-Legged Buzzard bonanza of the last few months? Am I the only person to have not seen one?  It's the Yellow-browed Warblers all over again, well... not quite.  In a naive way, I thought finding the Buzzard would be easy, I mean a big bird like that, how hard could it be?  It was a cold, grey, uninspiring morning, even the Common Buzzards just sat there in the trees. Still, the fens were scanned, and produced a lot of Kestrels. Not a large pale raptor in sight.  A few Red Kites and Buzzards were all.  The hours of the morning passed and it began to rain, with hopes for the RLB extinguished, it was perhaps time to move on.
Thankfully the Buzzard wasn't the whole day plan, we had a back up.  Just down the road was a 1w male Ring-necked Duck, again we approached with naivety.  How hard would it be to separate from the Tufty's?  Distinguishing it wasn't the problem, there was a distinct lack of Aythya ducks altogether.  And the lake it was on? Very large.  The sun was starting to set, at an angle which could only be described as awkward.   Again, we had to leave with no success.
Ah, at least there was some light relief, a few Corn Bunting in with a Yellowhammer flock was a nice surprise - and year-tick - on the walk to the car.
It was just one of those days.
Posted by Early Worm at 13:19 No comments: