Tigers of the Urban Jungle

It has, I believe, been said that London is an urban jungle. If one is to agree with such a statement, then it must be considered that, in a most un-jungle-like way, London is modest. It doesn't, as it were, exude an exotic exterior. Okay, that is if you choose to ignore the lurid green long-tailed squawkers which go around skiving peanuts and biscuits off innocent park goers. For an average inhabitant of this jungle, most days won't be filled with luscious green trees and parakeets who don't eat your peanuts, but with grey buildings and pigeons of about thirty shades of dull, and perhaps two of blue.
No monkeys, no toucans, no gorillas. Tigers? Well, that's a different matter entirely.
This jungle is home to tigers. There's even a choice of three or four species. One of these has only appeared in the city within the last ten or so years, and has now become well established, and before you ask, no, not in a zoo. If you live in the right area you may well find that they're right in your garden. In the off chance you were just about to start panicking and locking your doors, I feel it's worth pointing out that you probably won't be in much danger... these tigers generally choose flowers over flesh. Oh, and they're also only two inches big.  Neither Siberian or Bengal, nor even Sumatran, these are much closer to home: the Jersey Tiger.
There is some speculation as to how these stunning moths ended up in London, possibly they were released, but they may also have been migrants, or even wanderers from one of the already established colonies along the south coast. By whatever means they got here and now that they've arrived they certainly seem to be doing well.
My previous experience with Jersey Tigers extended so far as a single spider-wrapped individual on the windowsill last year. So, as I'm sure you may be able to imagine, with the prospect of them in the garden I was moderately looking forward to their approaching flight season. Okay, so maybe I was just a little more than moderately excited when I switched on the actinic trap last night, but come on, it doesn't get much better than this! 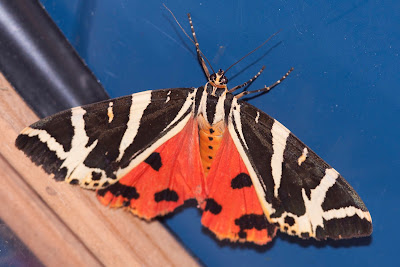 By 1am this morning the trap had brought in five of these giant beauties, several of which were flying around and flashing their exotic colours; looking better fitted for a rain forest than a small garden in the Urban Jungle.
Posted by Early Worm at 14:22 No comments: