I wouldn't say Red-footed Falcons and I have had the best relationship. I just find it hard to trust their 'realness'. Especially when they're in Essex. It's not as such the fault of the birds themselves, more my previous experience. This distrust, as it were, all started about, hmm, 2 years ago now, when a Red-foot was reported at Lee Valley. With the enthusiasm that comes oh so naturally to a child, I quickly travelled to see it via the delights of the public transport system. The report was unfortunately erroneous, leading to a rather devastating day. I wasn't quite as hardened a 'dipper' back then you see.
Since the fated day I've always glanced at reports of Red-footed Falcons with the shrewd eye of bitter experience.
Yesterday afternoon the shrewd eye crept back out, with reports of a female Red-footed Falcon at Vange Marsh. Shortly after, all shrewdness made a swift retreat - ah, the magic of photos.
Vange wasn't too far away... maybe it could be worth a trip. I then recollected that there were a pair of Black-winged Stilts there too. Yeah, maybe.
Okay fine, you're right, there was no way I wasn't going. Except maybe if there were train cancellations - I've never enjoyed replacements bus services. Thankfully there weren't any issues - yes I know it's hard to believe, but I fib not - and so my morning, well, some of my morning and a little of my afternoon, was spent watching this beauty! 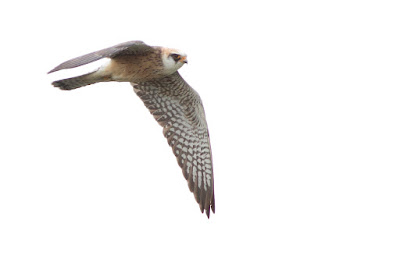 What a bird! Cross a Hobby and a Kestrel, add a drop more awesomeness and voilà!
It spent most of the time in flight over the water, or perched off in the distance, but on occasion it did the decent thing and showed off its aerobatic prowess at moderately close range to the awed admirers amassing below. 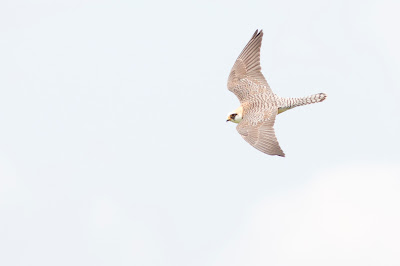 Please accept my apologies for the repetition, but really, what a bird!
I think I rather trust them now. 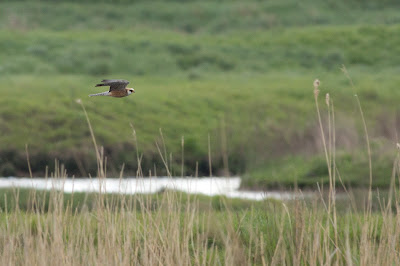 There was no sign of the Black-winged Stilts, but I wasn't complaining (much), it was still superb only to see the falcon. Just as long as the Stilts didn't show up again after we left, all would be well.
At 16:45, they did.
Posted by Early Worm at 10:47 No comments:

A Pyrausta A Day Keeps The Doctor Away

Five a day and it must be May. Okay, well technically that's not true, but be honest, what would you prefer, facts or rhymes? Surely you'd pick the rhyme.... every time. Alright, alright, I'll cut it out. Without a doubt.
To those slightly keen with their micro moth latin, I'm sure by now that an inkling of the following (un-rhyming) content has began to form. Yes, it's moths. That time of year is here (well that was  unintentional) again. Oh and of course, I do still live in Britain, so there will naturally be some complaining about the weather.
A few weeks ago Bob Eade kindly offered to show me around his patch in Seaford to see some of the fantastic and rather specialised lepidoptera species that occurred there. Up until this week, we could never find a good day to go, and I'm sure you can hazard a reasonable guess why - the weather, faithfully awkward as always. I mean come on, frost and snow in mid-April? Where was that in December? Oh and don't get me started on that wind...
Last week however the climate appeared to have finally noticed the calendar, knocking the temperature up into the mid 20°C's. The wind didn't really relent, but hey, it actually felt like spring - maybe summer even. The point is, it didn't feel like my fingers were going to freeze off. A very promising start.
Late Monday morning, after the now-to-be-expected train delays (I did however manage to see a Pyrausta aurata in my spare time), I met up with Bob and we headed off to his patch.
Within just a few minutes of arriving we were greeted with good views of the scarce, delightful little Elachista subocella. 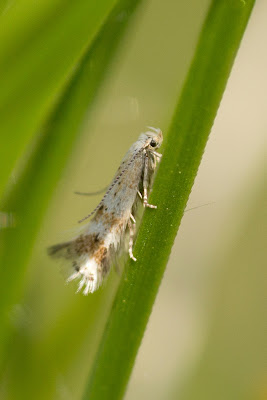 We continued on, seeing: Silver Y, Cinnabar, Burnet Compaion and Pyrausta despicata. A nice surprise was a Pyrausta nigrata, not a moth I'd expected to see.
Pyrausta ostrinalis was one of the species we were hoping to see, and after about twenty or so minutes Bob found one. An extremely beautiful moth, but, you know the word mean? Well they were, for the most part, the definition of mean. Perhaps so far as invidious? They had the idea so  ever present in wildlife, that moving during the taking of an image is good. Like a sixth sense almost.
Ah well, it certainly made me much more appreciative when one landed and stayed for a while.
They really are superb! 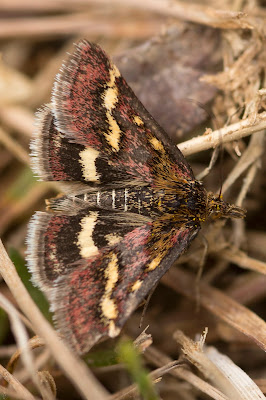 There were plenty of good butterfly species around too, a few Grizzled and a dozen or so Dingy Skippers, as well as a couple of stunning Green Hairstreak.
The fifth species of Pyrausta turned up shortly after, an incredibly fresh - and as such stunning - purpuralis. 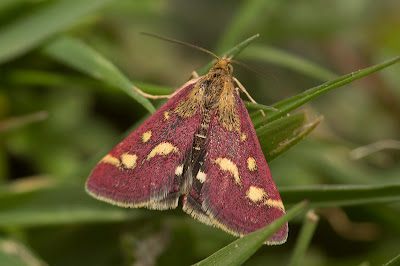 One of the micro moths we saw was unfamiliar to the both of us. When I got home I tentatively ID'd it as Tinagma balteolella, a rare species, and after a couple of days, the county recorder kindly verified this. It was only the second site ever to have knowingly held the species in Sussex, and the first sighting of one in the county for 30 years! 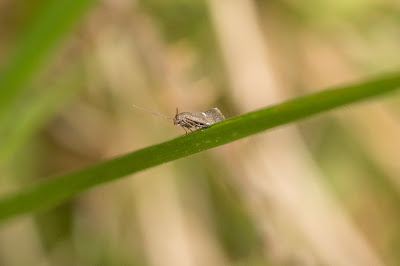 A big thanks to Bob for showing me around, such an incredible array of great species and a superb day out.