Human beings are without a doubt the most destructive of earth's many million species. We pride ourselves on our opportunism, our intellect and our ability to succeed over any other species. The progress of human 'civilisation' has relied on it. Yet hidden among these traits is one which has caused us to inflict great damage upon the world we live in - through the destruction of habitat and the extinction of large quantities of the natural world - negligence. Human venture and comfort comes first, with hardly an afterthought for what affect it may leave upon the environment.  As a species, we've thrived, and our cavalier behaviour must take at least some credit for it. But it is  traits like these that we (we the human race, not necessarily you, me or the guy over there) seem to find deplorable when illustrated in far less damaging ways by any other life form. It was estimated in 2005 that the current rate of deforestation was a slowly decreasing 13 million hectares per year. I imagine an animal or two may be displaced (not to mention displeased) by that, it's not like we offer much of a re-homing scheme. And still, were a fox to so much as sniff a bin bag in certain areas London, it would find itself on the front cover of the Daily Mail, where, after much hyperbole and hysteria at the nuisance caused, an exterminator would find themselves slightly heavier of pocket. 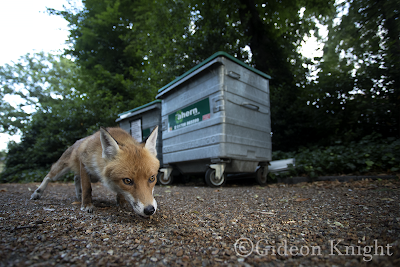 Having lived my life in towns and cities I have seen first hand the behavioural adaptations species have had to make to survive in this, the 'urban jungle'. Through the destruction of natural habitat as we make way for the ever-expanding human population, we have left some animals with nowhere to turn except to our megalopoli.  Yet so detached have we become from the natural world that many seem intolerant of these species. Those that, like us, are chancers, opportunists that take advantage of the possibilities in front of them. What to us may be trash, to some species is a livelihood. They thrive off the laziness and waste of humans, making a utopia of this seemingly barren habitat.  In doing so, they may cause minor disruptions in our lives: a torn bin, a stolen chip... but surely that's a small price to pay when one considers what we have taken from them.

National statistics for the UK, as far as they can be trusted, estimate that the Herring Gull population has declined 50% since the nineties. However, in urban seaside areas, among the heaving herds of tourists, the species thrives. Ice-creams, chips, coffee cups... the diet available to them is vast and never in short supply.  I have lived part-time in Brighton for seven years, and so Herring Gull are part of everyday life for me. Their boldness is incredible, but it has caused them to be seen in the eyes of many, as pests. I've heard rumour that the ruckus they raise is also quite unbearable.

One evening earlier this year, I photographed a group of three gulls who were midway through a game of tug-of-war with a bundle of bin bags. Unsurprisingly, thin, cheap plastic gave way to the gulls' sharp beaks and the wonderful bounty of wrappers and spoilt food spilt forth. From it the gulls retrieved such rewards as an entire pitta bread, leftover salad and, alas some golden foil. To us, this was trash, but to the gulls it was dinner.  Our wasteful behaviour has created a niche, an abundant food supply, and nature isn't about to let that go to waste. This opportunistic behaviour, to take what's needed and leave a mess behind is moderately reminiscent of another species.... and yet, it caused names such as 'vermin' to be thrown their way by passers-by. 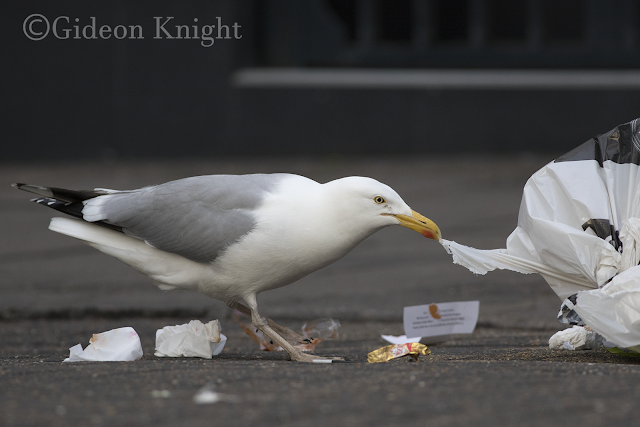 Referring once again to statistics of doubtful validity (well they're not from the Daily Mail so they can't be that bad) it is estimated that per annum 7.3million tonnes of household food is thrown away in the UK alone. A staggering, disturbing figure for such a small country. To have rubbish strewn across the street is in no way pleasant, but I think burdening the blame upon gulls, foxes and whoever else may go through your trash, is a way of avoiding responsibility.  It's not your broken phones and newspapers they're after, it's that 7.3million tonnes of food. These 'vermin' have discovered a niche caused by us and are exploiting it.... and can you blame them? The phrase, 'Waste not, want not' comes to mind.

Personally, I find it quite unfortunate that these species eat trash. For the most part it's a better outcome than the food going to waste, but the amount of non biodegradable material I've seen Herring Gulls eat is quite horrifying. Eliminating food waste completely is undoubtedly impossible - we're not going to become impervious to mould overnight - but there are most certainly steps which could be taken to significantly reduce the figures. I think we'd all like cleaner streets and slightly less plastic-filled gulls.

Like a stubborn toddler, it seems most metropolitans aren't keen to share their dirty delightful streets with anything more than humans and smartphones. With the population becoming more and more disconnected with nature, it is saddening to think that for some, their only remaining connection is their love to complain about it and the oh so huge nuisance it is for them.  Having wiped out as much of the natural world as we have, should we not strive to live harmoniously with those that have adapted to this new habitat we've created, not shun them away?