Just before 10 o'clock we headed up to Hollingbury golf course where I know you get Skylarks, and as soon as we arrived a Skylark was singing. After ten minutes of walking, I finally saw a Skylark - this one was hovering with what looked like a caterpillar in its beak. Two more Skylarks took to the air and started singing.

After they landed, we carried on walking and saw a pair of small-heath butterflies and a pair of Linnets! By a small pond a bird was singing and two Swifts were swooping down and drinking while still flying! Eventually, the bird that was singing popped up but dived back into the brambles. It surfaced again and I saw that it was a Whitethroat! Again and again it surfaced and dived back in again until it eventually flew off and I'm certain another Whitethroat joined him. 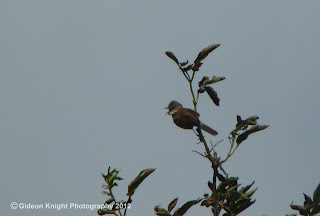