I, as I'm sure is the case for most people, have heard Cuckoo's cuckooing.  Not many times, but, given that I spend most of my birding time on a London patch where a Swallow would be a mega, no surprises there. I'd not, however, ever seen one.  I resolved (as I do every spring) that this would be the year that would change, the year I finally saw one. With several birds being regularly reported at Two-Tree Island, it seemed only right to head down there this morning.
The Cuckoos had been on the east side of the island, and having arrived there it didn't take more than fifteen minutes before a Cuckoo could - just - be heard over the buffeting wind. This was then quickly followed up by a flash of long-tailed pointy-winged grey as the Cuckoo flew off.  We walked back a way in the direction it had flown, to try and re-find it. And after a few minutes of scanning, I picked it up in a hawthorn opposing one of the hides.  Yes, finally!  At long last I could put a bird to the song.  Or however that expression goes.
It was a male Cuckoo, and he gave fantastic views, singing on and off. He was soon joined by a female who flew in ever so briefly, before the pair departed.  Not for long though, as they both then proceeded to show well intermittently over the next two hours.  Beautiful birds, much better views than I was expecting... 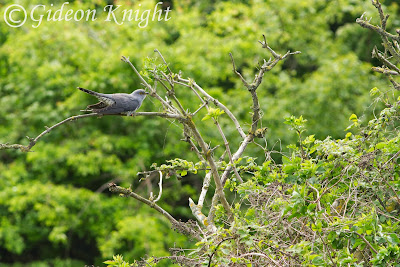 There was even a third Cuckoo singing over the west side!

Worth the wait? Yeah... suppose so.