A Quick Stint at the Marsh

Remember when this blog was true to its name and was about birds?  When scopes and telephoto lenses were a common feature? When I regularly complained about dipping, or less commonly, told of successful twitching? It seems to have been an eternity doesn't it...  But fear not, for on Friday, my scope having been recovered from hibernation and my binoculars having been dusted down, I went birding. Yes, you read that right, birding. A rather nice spot of local twitching to be precise. A bus, a train and a walk later (OK so maybe just local-ish) and we had arrived. Let's get the eyes back to looking at blobs in the distance, and what better way to start than with the Vange Marsh Wilson's Phalarope.
There were half a dozen or so birders there already, so it wasn't long before one of them had got us onto the hyperactive speck that was the Phalarope.  Even at that distance there's no mistaking a phalarope! Although I wouldn't have been too happy to comment which species for myself... 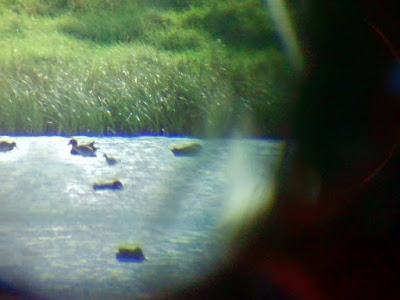 Slightly closer, but by no means close, were three delightful, and oh so tiny Little Stint, scurrying around some sleeping Mallards.  A species I've wanted to see for a while now (The Stints, not the Mallards), so it was nice to get some reasonably decent scope views. 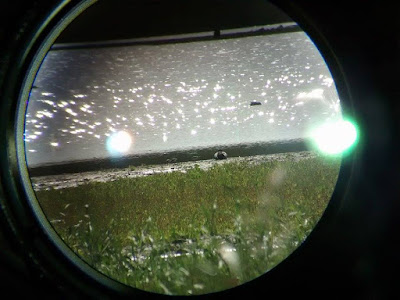 Asides from taking such stellar photographs, it was just good to be back in the field birding again, and with some great birds too!
Posted by Early Worm at 08:41