Ridiculousness. Complete and utter unbelievable ridiculousness. And no, I don't mean the fact that I'm writing a blog again. Again, no, it's not that I've actually been busy with college, and work since last I related a tale to you all. The sheer crazy, is this really happening??ness stems instead from... please sit down for this... birding.  Actual birding. Okay, maybe twitching, but still, birds were, or rather a bird was involved.  And it was this bird that caused, for many people, a state of flabbergasted awe. Which, to be fair, is most certainly the correct state to be in once a Red-backed Shrike has glided down and taken a grasshopper (R.I.P) from right by your feet. Wouldn't you agree?
Crippling views is a term which is often overused, here though, it's justified. A shrike sitting on a perfect perch, in lovely light... you don't get much better than that.
In the off chance that you haven't worked it out yet (I mean it's not as if the internet's filled with pictures of this bird), yes, I went for the Tide Mills Red-backed Shrike.
It had been present for about two or three days before I managed to get over there, and I had heard it said that it was showing rather nicely.... well they got that right. 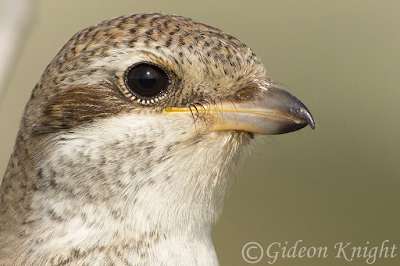 I arrived at about 1pm and spent a good five hours there, leaving at around dusk. The days really could do with being a bit longer again. The shrike, a first summer male, was on show almost the whole time, and was having his picture taken at a rate of about 40 times a second. Well, what do you expect, it was basically a photographer's dream, if photographers were ever daring enough to have a dream that crazy.
At a twitch it is usually considered bad etiquette to approach the bird even a little bit, this wasn't one of those times however (although I'm not saying no one complained), as the shrike would let you approach to within ten feet of it and hardly give you a second glance. 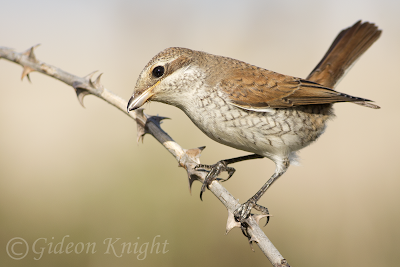 Despite the presence of a large number of photographers, the bird managed to feed well throughout the day, catching grasshoppers, cranefly, bees, Devils Coach Horse beetles, lizards and apparently a Pygmy Shrew.  I was, I must admit, rather fascinated to see a lizard, dripping gook and impaled in a rose bush. Shrikes really are very lovely birds.
As the evening drew in, it stopped feeding so much and started to sit one legged at the top of bushes issuing forth a soft, scratchy sub-song. Not very common behaviour for a shrike in Britain, but then I'm not sure much that this bird did was.
Such a crazy good bird, quite possibly the best £2.95 I've ever spent; even if it did take me 2 hours to complete a 30 minute journey to get home... Ahh, good ol' public transport. But even the soul crushing abilities of buses and trains were well worth it. 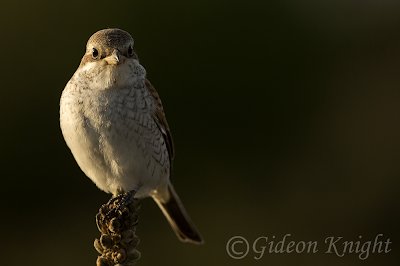