A Bird in The Hand is Worth Two in the Bush...

...A very old Proverb, and I totally agree. Actually, I think a bird in the hand is worth more than two in a bush, four maybe?  Although the bird must be considered before such a rash idea is made.  For example, a Feral Pigeon on your hand may not be worth as much as say, two Chaffinch in a bush, but a Chaffinch on the hand, in my humble opinion, is worth 100 Feral Pigeons in a bush.  And so on and so forth.
Well in the last week or so I have visited Kensington Gardens twice, and both times we have brought a small tub-full of bird food.  The first time we bumped into local birder Ralph Hancock-see his blog here- and he took us to try and find the Little Owl in his tree.  As we were walking Great Tits, Robins and Chaffinches would come out of the bushes and wait until he would feed them, some even hovered around his head!  Well we didn't see the Owl, typically as with all owls they are a pain to see.
After he left, we had a go at hand-feeding, and managed Great Tit, Blue Tit, Robin and Feral Pigeon! Not a bad list.
Yesterday we went again, and this time I managed to add Chaffinch, Ring-necked Parakeet and Starling to my list.  Photographing them was hard as most would fly away at the sound of the shutter, and some were incredibly quick.
After a while I had an idea -shock horror- I thought what a good idea it would be to photograph birds with a macro lens, so out came my Raynox DCR-250. And with the lens 10cm or so from my hand the birds still came! Most of the time they were too quick, but on the odd occasion one would stay for longer and off the shutter would fire. 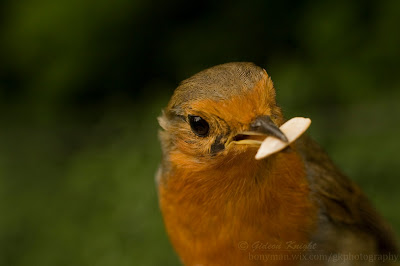 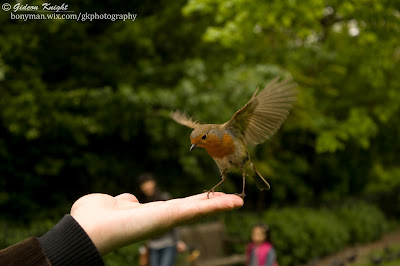 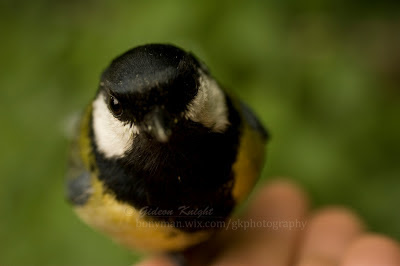 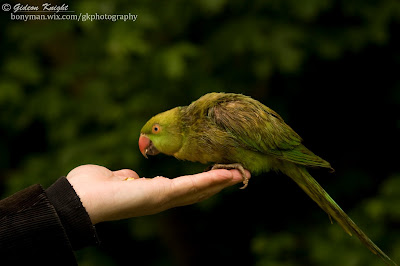 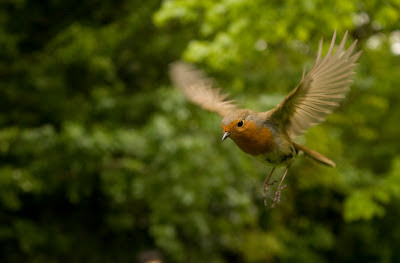 It is interesting to feel the grips of different birds on your fingers; a Robin for example spends a lot of time on the ground, so its talons don't need to be that strong, so they feel light as you like, but a Blue Tit who spends a lot of its life hanging from branches has a very firm -and sharp- grip.  Great Tits are somewhere in between.  Another interesting thing is learning to tell individuals.  One Robin had some feathers missing near its beak, one Blue Tit was particularly scruffy, one Great Tit sadly had only one leg and the Parakeet had some form of Mange on its wing.
So all in all a lot of fun, and some pictures I am pleased with, though they are a little noisy because of high ISO -again-.  My favourite will have to be the Great Tit, but I am also pleased with the flying Robin, apart from the noise of course, as I haven't been able to photograph fling birds before.
Posted by Early Worm at 04:29