As you may have remembered I posted a few days ago that my patch had re-opened.  And I'm sure you remember why it closed.  And yes, my worries were to some extent confirmed.  You see I was curious whether a 3 week absence of people in a usually busy park would affect the wildlife at all.  It did.  Nothing major and definitely nothing lasting long.  If only it had lasted longer.  You see on the first day that the patch reopened a Little Egret turned up.  Yes I know nothing too exciting, but on my patch, pretty mega and when I found out it was too late to even bother trying to tick it.  And naturally it wasn't reported again.  Just fantastic.
The disappointment didn't last long though.  It seemed that the patch wanted to make it up to me.  First with this.... 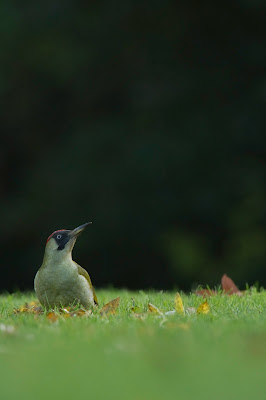 Although I won't deny a little bit of light wouldn't have gone amiss here.  But it's always nice to get close to one of these.

I've visited twice since it has re-opened.  On the first visit I had the Woodpecker, and on the second it was a lake bird which made my day.  Well not just one bird but five.  You see on my patch I've never seen more than two Little Grebes at any given time, so to have two at one side and three at the other....well, everyone's patch is different.  To many this may seem trivial but I've been coming to the park for nearly two years birdwatching, and this is the first time I've seen that many Little Grebes.  So quite a day in my patching history.
I'm now almost over the Little Egret, but it' still lurking there at the back of my mind, one day I will see one here.
Posted by Early Worm at 13:36