As I said in my last post it was my plan yesterday morning to have another look for the Kingfisher.  When I first arrived, the waterway where I believe the Kingfisher is currently residing was still in shade as the sun hadn't reached it yet.  So I doubted that the fish would be swimming in the cold water, I wouldn't want to if I was in their place.  However it wasn't long until the sun started reaching the area and only another fifteen minutes until I spotted the Kingfisher flying in from behind us.  It flew into a bush before landing on a perch I had randonly set up the day before.  It sat here for at least twenty seconds while my father and I stood just twenty five feet away on a footpath.  The bird was caught in a single ray of sunlight which brought the colours out superbly against a dark background leading to quite a good photographic opportunity.  Not a moment I will be forgetting anytime soon. 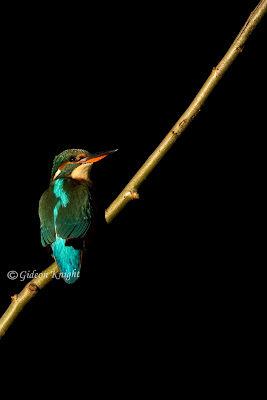 To think that there is a Kingfisher only a 2 minute walk from my house is unbelievable!  The start of a new project I think.
While I was waiting for the Kingfisher to turn up I saw a fair few more Redwing than yesterday which is a sure sign that winter is coming.  Maybe there'll be Fieldfare soon, I'm ashamed to say I haven't patch-ticked them yet.  I know, dreadful isn't it?  But my patch now has a Kingfisher so I'm far more than happy. I remember a few months ago I was complaining about my patch having nothing of interest, it just shows that perseverance pays off.
Posted by Early Worm at 09:04