It's been a while since I've used quite so bad a title, may I have your forgiveness?
With the forecast set for sun all day, we headed to the Essex coast yesterday to look for an oversized Kestrel. Wait no, a Rough-legged Buzzard.  Namely, the Wallasea Island bird which has been present for about a month now.  After dipping one in Cambridgeshire last month I was glad for another attempt.
Most of the raptor activity was told to take place later on in the afternoon. So a couple of hours trudging along the seawall brought in a few year-ticks. Nothing too mentionable, but it was nice to see an abundance of Corn Bunting, with flocks of at least thirty birds around. The estuary held a few waders as well as Teal, Wigeon and Shelduck with the occasional spectacle of several thousand Brent Geese in flight.
At about two it was sufficiently late in the afternoon to start the raptor-watch from the carpark. Well, maybe still a little too early - it was quite a slow start with just a distant Marsh Harrier to keep us company. But given time the Marsh Harrier was joined by two Kestrel, and a stunning Ring-tail Hen Harrier.
After half and hour had passed (and while trying to relocate the Hen Harrier), I had another large raptor fly into scope view.  As it flew it showed off long wings and a white black tipped tail. If this wasn't enough it even began to hover! Readily ID'able as the Rough-leg despite it staying in the far, far (maybe even further) distance.  Our goal was achieved, and although the views were somewhat underwhelming, it was a great bird to continue a great start to the year.
With the sun now getting low in the sky, we drove just a couple of hundred metres down the road to get a better view of the fields. And with this, there would hopefully come good views of Short-eared Owls. A single bird in the distance started things off, and when the light started to get bad counts went up to at least five! They showed magnificently for the scope, and did occasionally come closer. Of course, the light made getting a decent picture impossible. 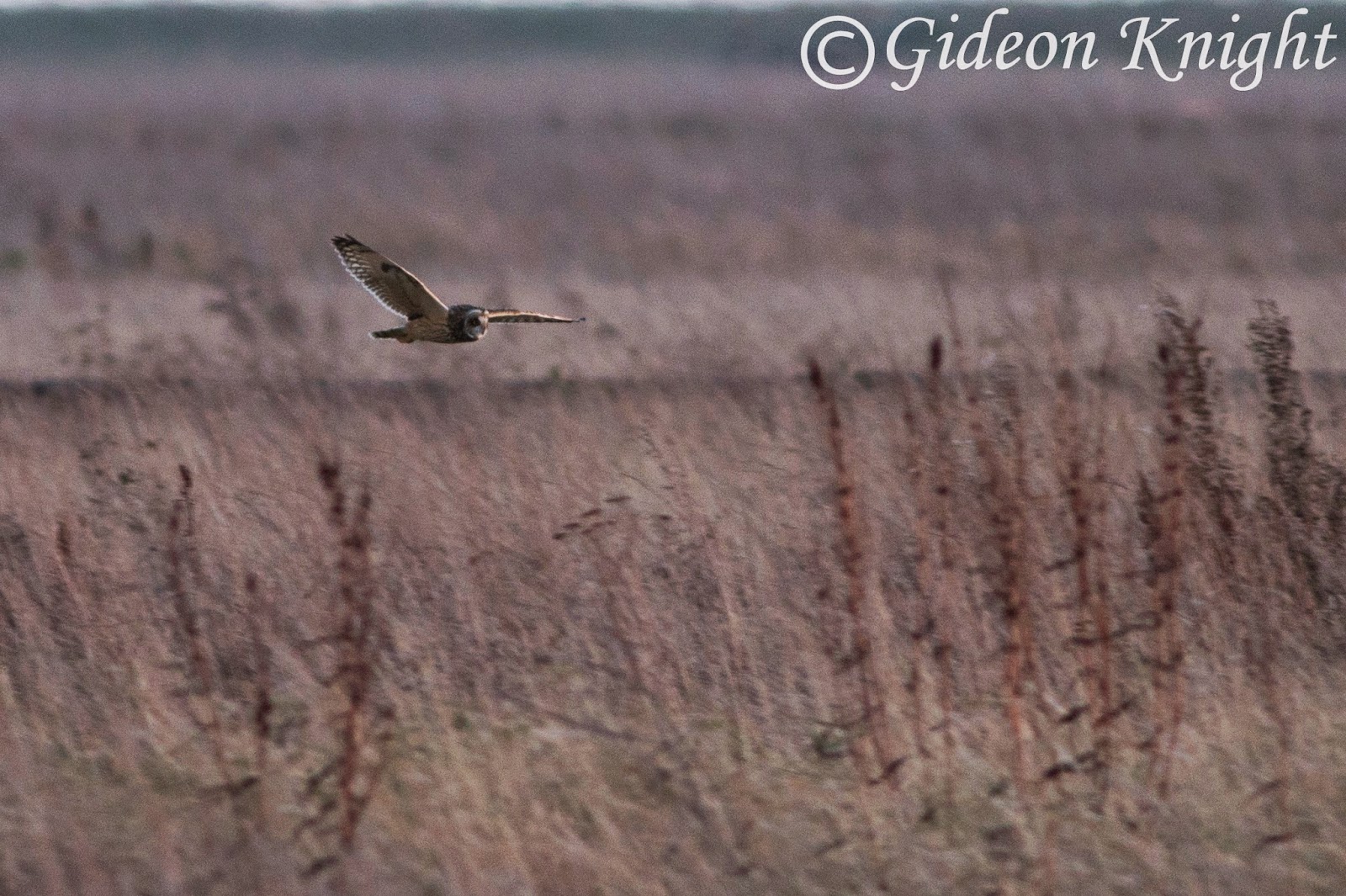 They were very vocal and seemed eager to fight, one taking on a Marsh Harrier, while a Hen Harrier flew below them. What a sight!  We watched them until it was becoming too dark to see them, and then left for home.
There was a slight bit of misfortune on the way home, I foolishly managed to miss seeing a Barn Owl by half a second as it flew by in front of the car.  Embarrassingly Barn Owl's still a lifer, which just makes it a bit more painful! A vocal Little Owl at the top of a tree provided silver linings, to end an incredible day's birding.
Posted by Early Worm at 12:06