Gull on my Mind

I like gulls.  Or rather, sometimes I like gulls.  It's not so unusual an occasion that I ignore gulls. Especially large flocks of gulls.  More especially if the flocks are of large juvenile gulls.  The thought of searching among all that mottled brown plumage for something of interest... The mind boggles.  It's not to say, that I don't enjoy seeing gulls themselves (with the exception of the 1st winter Yellow-legged Gull which I'm sure was a Herring Gull going through a 'phase'), it's just the idea of finding one, or more for that matter, attempting to.  Daunting stuff.
Caspian Gulls? Well, there lies a slight difference. It's long been a hope of mine to see a Caspo.  I would even go so far as to scan a flock for a Caspo - given the flock wasn't too big, of course.
Recently, a 1st winter Caspian, had been reported at Wanstead.  So it was, Friday morning, having expanded my limited knowledge of gull identification, I walked the mile or so to Wanstead and prepared to scan gulls.
Honestly? It's not quite so bad.  Sure, I may have seen several YLG's and not realised it, but I was at least pretty certain that I hadn't seen the Caspo for the first half-an-hour of scanning.  And that's something isn't it.  Isn't it?
Having searched the football fields and the Alex pond, with no luck, we decided for one more look before heading home.  Another scan of one of the fields revealed two or three large juvenile gulls in the flock.  One of which had a suspiciously white head. And were those legs particularly long too? It was hard to tell with the gull having laid down.  But the features looked promising.  It certainly seemed to stand (not literally due to the laying down part) out from the other gulls.
When eventually it did stand back up it showed that yes, those were particularly long legs, the also long, blackish beak was almost parallel with its' head, and in flight it showed pale underwings - Caspo. 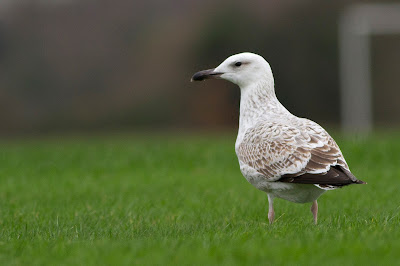 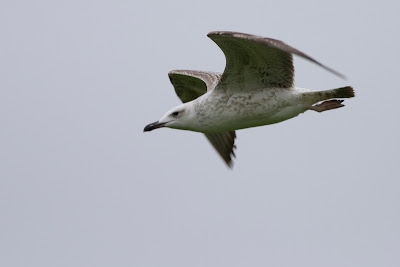 I later learnt the white rump, dark subterminal band and shawl were also good pointers... Nope... I have no idea what any of that means either.  In all honesty, picking out a Caspian Gull wasn't quite as hard as I'd imagined.  Even from quite a difference I was fairly positive of the ID.
You know, maybe, just maybe, juvenile gulls aren't that bad after all...