Excluding the patch, it'd been quite a while since I was last out birding. That stunning 1st winter Caspo was the last time I'd ventured away from the park for birding, and even then it was still just down the road. That being the case, I welcomed a trip out to Rainham Marshes on Friday to properly start the year's birding. It didn't disappoint: birds, sunshine (yes that does still happen), more birds and a good ol' dollop of stringing. What more could you want? I suppose a Glaucous-winged Gull wouldn't have gone amiss...
Having travelled by public transport I met up with Jean-Michel Blake (a new London birder, recently moved here from the probably much more bird-filled Zimbabwe) at Purfleet station, before we headed to the marshes.
The unseasonable mildness we had been experiencing with the weather of late, has now gone. Very far away. It was a bit 'chilly'.
Having scanned some of the ducks we headed round to look for the Dartford Warbler, which has seemingly ended up on the wrong side of the river. We were greeted with the cursory 'It was here ten minutes ago', and followed this up by giving it a further fifteen minutes to show itself.  The wait, although brief was not in vain. No, sadly the warbler did not show, but we had a Barn Owl pointed out, as this photo oh so clearly shows, so I'm not complaining. 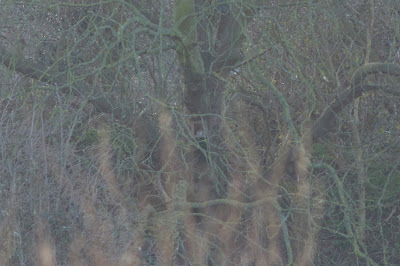 We completed the circuit of the reserve, getting several great views of Marsh Harrier, a few Snipe, a flash of a Kingfisher and a total of 45 species.
Then, after a hot beverage had been consumed, it was time to look for Short-eared Owls along the Thames path.  There was a slight delay, caused by me losing, and subsequently (a hundred or so metres back the way we'd come) finding half of my scope's eyepiece... But no need to worry, ten minutes later a Short-eared Owl took up in front of us! Always such stunning birds to see.
With the train service home being rather infrequent, we began the walk back along the edge of the Thames to Purfleet. It was during this walk I picked up on what, from their call, I expected to be a pair of Rock Pipits, as they took up from the shoreline. I fired off a few photos as they went over. Now let the stringing commence. Upon reviewing the images, the birds seemed paler than I'd have expected, and the eyebrow was pretty strong too...hmm. Thoughts of Water Pipit started to creep in. 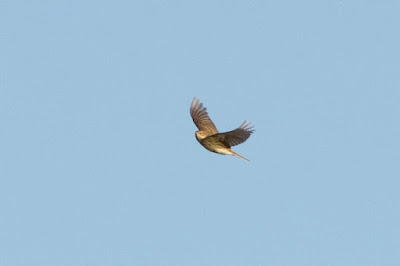 Having narrowly caught the train, and once the arduous experience of being a sardine on a bus was through, I got the photos up on the computer, where they looked even better for Water Pipit. There was even a white outer-tail feather. I daringly braved posting the images online, and thankfully was rewarded with several agreements to my suspicion. Water Pipit! Sure, it's not a rare species, but it's one which I'd long wanted to see.
Good company, good birds, terrible photos.