Since January every time I go to my Grandmothers for the night I put out food, set up the camera and wait.  For once it was not a bird but a mammal I was waiting for: a Fox.  The first night I caught a glimpse of it at the end of the garden.  This was when we got heavy snow and I couldn't get back so I stayed another night and this time we were successful.  The only reason this was possible is because there's an outside light which is set off by movement.  It is a nice way to photograph wildlife -although the shots are never great- as you can sit down eating your dinner etc while you're waiting!
The snow was great as it made the image even brighter, but after then I struggled to get anything.
Also, when I tried the flash it got white eyes and, as I didn't want to hurt its eyes,  I stopped using it. 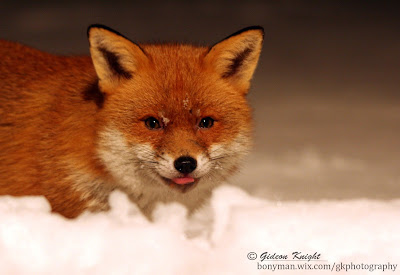 I tried various other techniques; using an old 200mm f3.5 SLR and adapter, but the adapter seems to add f1.4 and the lens is MF not AF, so the results were terrible.  The next idea I had -this was last time I was there- was to use the Tamron 70-300mm f4-5.6, although the quality is not brilliant, at f4 it works quite well in low light, but a 1/10 shutter-speed was used with ISO 800.  Despite the slow shutter I got my best mammal shot yet, and it was through a window! 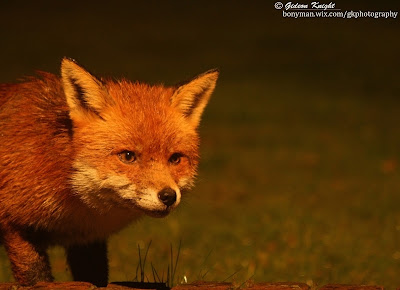 The area my grandmother lives in is suburban and quite 'well off', so it was very healthy looking, and as my grandmother stated 'He has a teddy bear face!' 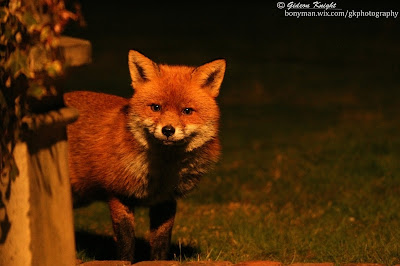 I am hoping he/she finds a mate and brings cubs to the garden later in the year, one of her neighbours had two cubs in daylight in their garden last year!
Posted by Early Worm at 10:34