When I was in the early stages of birdwatching, I saw a bird at Valentines Park -my Patch- which I had no idea about its identity.  When we got home I looked it up and found it to be a Great-crested Grebe.  Now we are talking a long way back, when I had trouble identifying a Goldfinch, so a Grebe was breathtaking.  And to this day I admire them.  Since Valentines Park has become my patch Great-crested Grebes have become a rarity.  With one showing up for a day over eight months ago.
On Saturday my brother wanted to go to the Basketball court in the park - as we were walking around the lake I spotted a pair of them out on the water.  I had no camera with me so decided that next morning we would go again with the camera this time.  One was quickly located fishing quite close to the shore - the first time I have seen a fish caught at the park.  The other was further up sleeping in the middle of the lake.  As we watched, it woke up and called, a funny sort of noise it was too. 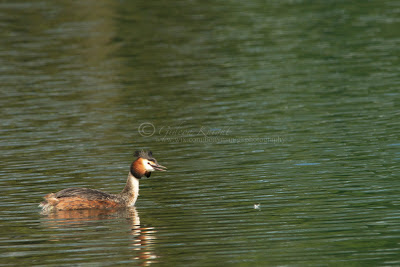 After that we decided to have a look for the Little Grebes, but we hadn't gone far before my father looked back and saw that both grebes were together, and facing each other.  I immediately recognised what was about to happen so back the way we came and just in time.  Almost as soon as we were in place they both went under and surfaced with weeds, then, heads bent low to the water they swam at each other and went up into the 'Penguin Dance', something I have wanted to see for a long time.  The nesting material is to prove I believe that they are capable at building a nest, as I have heard that they need daily repairs done to ensure its survival. 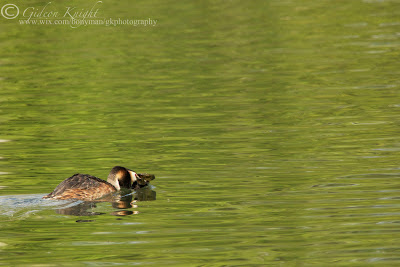 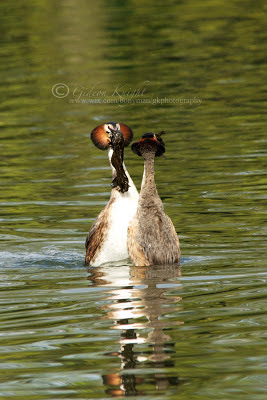 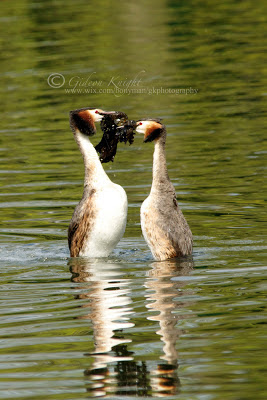 Hopefully they will nest here and be successful, as I would love to see the young hiding on their parent's back.  And I would also like to get a good picture, as I only have what I would call decent pictures. Eye-level shots however are impossible on this lake as there is a railing going round.
The Mute Swans at the patch are still on eggs, I don't know how many, and the other pair of Egyptian geese have one Gosling.  I haven't been to check on the first pair since last week.
Oh, and I picked up my first Swift of the year the other day, putting me on 129 for the year.  I picked them up by ear and located them as distant specks above the garden.
I've just realised that even a brief update now seems to take up more than the whole screen,  I remember when it would be about three paragraphs!