I warn you now that this will with most probability be the longest post I have done....Ever.  It just wouldn't do justice to the trip if it wasn't hugely long.
We had an early start, around 6:30 and left shortly after 8:00.  I was at first worried about getting sea-sick on the 7 mile journey out to sea, but my worries were soon packed away when I saw how calm the water was. 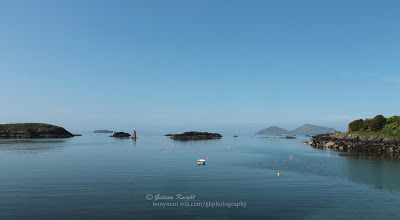 When we got on the boat the driver asked if Caleb and I wanted to sit at the front for a better view, we must have looked like photographers.  Don't think my 500mm would be a give away would it?  Must get a bigger lens.  I really appreciated him doing this as I would probably have pulled a back muscle otherwise straining to see behind me.  It was, we decided, like first class at the front - you could sit with your legs stretched out and your back up with a view of the whole sea ahead.....luxury....and two hours there and two hours back.
First off I finally got Gannet on my year-list.  Then, about twenty minutes later a pair of Manx Shearwater came by, my first lifer of the day.  Typically there had to be one species which wouldn't pose, the Manx would just come by and go straight out of camera range again.  Of all the shots I did get they are either badly exposed -shooting into the sun- or off focus.  Nice birds though, just a shame they live so far out to sea.
It wasn't long before we had our first auk, a probable Guillemot, then the first Puffin of the day, another lifer.  This was followed up by a Razorbill my third lifer of the day.
There were four dogs on the boat and one, who had a bad paw, liked to sit at the front of the boat.  As we were travelling we caught several glimpses of a marine animal, and every time the boat would slow the dog would rush to the front of the boat, but whatever was in the water didn't resurface -typically  camera-shy animal number two.  Finally however it did surface and I got off a burst of four shots.  It's a three FPS -frames per second- camera so it was up for a short while.  It was a Pilot Whale.  My second species of Whale this year.  It popped up on the other side and I managed a more atmospheric shot.  Well I think so.
Another interesting thing in the water was a Sunfish.  All we really saw was a fin waving in the water, but if you strained your eyes a shape could just be made out underneath the surface.  The pictures of the Sunfish weren't very interesting, just a fin, so no point posting them.  The whale was more interesting. Well after 2 hours we were approaching land and the amount of Guillemots doubled, there were small flotillas of about 20-30 birds.  Nice to see these birds close up as before they had been way out to sea.  Shame there weren't any close views on lands, only a small congregation on one of the rock faces. 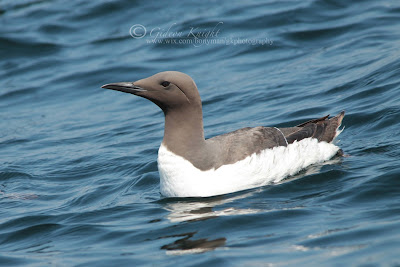 Well when I tried to stand up after reaching the island I had trouble - my legs had gone stiff from sitting for so long.  So you can imagine I was over joyed to find out we then had to climb a long way up some very steep steps in the sweltering sun.  But it was worth it to see the Puffins - fantastic birds...But they just don't seem real.
I might as well get this over with now, the Sun.  Well....the sun was high.  This was not preferable.  Getting a good exposure was near impossible, especially as the white on the Puffins breast was so reflective of the sun.  So I resolved to finding a Puffin in the shade to photograph.  For  once I was actually happy with an image.  I know, rare. 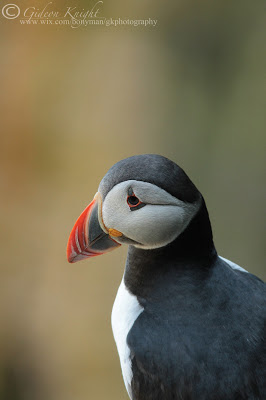 The harsh light did make this shot possible though, so I shouldn't complain.  Another shot I am relatively pleased with, no real editing either.  Just a crop. 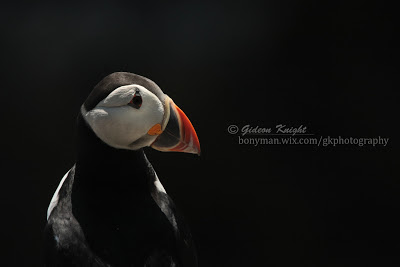 Something I noticed was that the sun was so hot that a lot of the birds on nests were panting as they can't sweat. This is something you see with Thrushes too, when Blackbirds or Robins sunbathe they open their wings and beak.  But they actually want the sun.  I don't imagine the same can be said for the sea-birds. 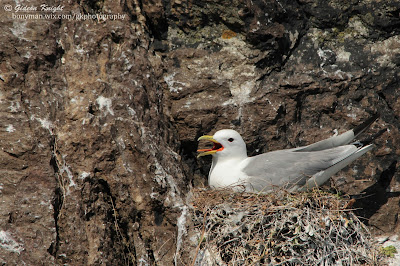 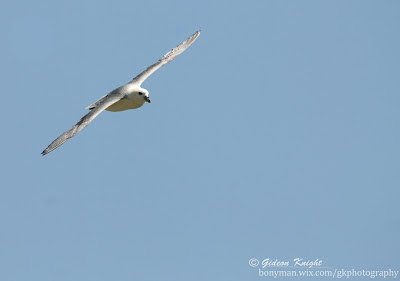 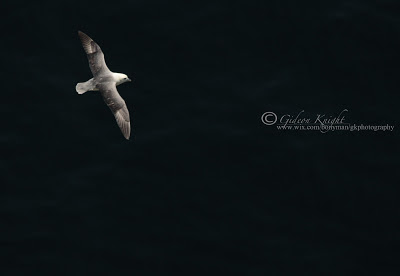 Next was on to Little Skellig where you get a couple of Gannets.  Just to give you an idea of how many this is a shot of the non-busy side. 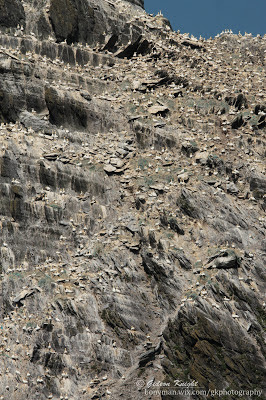 About 25,000 pairs nest here, a fair few.  On the other side of the island there were so many I would be surprised if any of the rock they were sitting on was visible!
Surprisingly I didn't see any Gannets diving, at first I thought this was unusual.  But thinking about it Gannets can go hundreds of miles to get food, so as we were just a few hundred metres away seeing them dive would be unlikely.
Around this Island were even more Guillemots and Razorbills, and much closer than before.  Sometimes only diving when the boat almost ran them over. 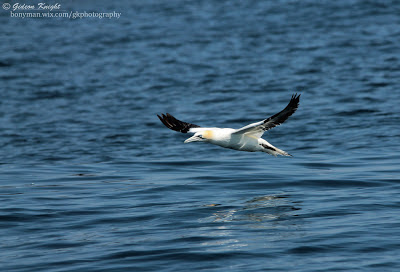 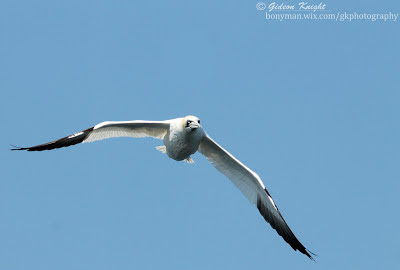 Now here's an interesting fact I learnt recently.  The pigment that makes the wing-tips of a Gannet black strengthens the wing.  I wonder if the same applies with Greater-black backed Gulls?  I know that most gulls have black-tipped wings, except white-wingers of course.

The trip back on the boat was just as fun as the trip there.  With even closer views of Manx Shearwater -still no good shots- we had some nice views of Gannets and I managed to burn my ears.
Did I do the trip justice?  11 images must be a record for me so yeah I think I did.  Definitely the longest blog I've done yet, the only rival could be Dungeness which has 10 images.  I made sure this had 11.  On the subject of blogs, I was devastated to find out I had missed the anniversary to my blog.  Oh well.   My blog is now 1 year and eight days old.  Not bad.
Posted by Early Worm at 13:35