The story behind Ilford's most famous gull.  It starts on an October day way back in the year 2000, when I was still but a baby.  Local birder Peter Hopkins was having what I'm sure was a nice walk around the lakes when he spotted a Mediterranean Gull.  The Gull we now know as Valentino.  Already in adult plumage, so at least two years old.  This fantastic little bird was then ringed in 2002.  And would you like to guess where?  Belgium, in the city of Antwerp.  He was ringed as part of the European Mediterranean Gull Ringing Scheme, and when they were told of his presence in the UK  they said -and here I quote: 'Really Astonished!'  I don't blame them.  A 200 mile journey at least.  I suppose migration of most birds is longer, but still to my eyes it's quite a trek. 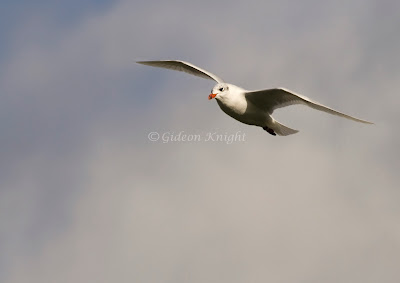 After a bit of simple  (extremely simple) calculations, I estimated that this gull is at least fifteen years of age.  Older than me.  But the most interesting thing, in my opinion, is that according to the BTO's study the oldest recorded Med Gull so far lived until it was fifteen years three months and seven days old.  This means Valentino is in for a chance of snatching that title.  The funny thing is -well not exactly amusing - as far as gulls go, and they do go a long way, fifteen years is quite a short period.  Even Black-headed Gulls have reached twenty nine years.  Although this could be due to there being many more of this more common species, so more chance of a re-catch.  It would be incredible though if Valentino did set the age record.
Considering his age he seems in good shape still, though I have yet to work out out if he is more or less dominant than the Black-headed Gulls?  Well he'll be here for a fair while longer, so I should have time to find out. 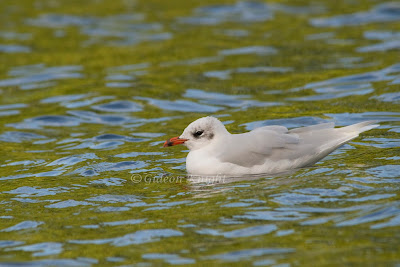 I'm not sure how it is in Belgium, but over here as I'm sure you know, some people seem to take feeding birds to the extreme - I have myself witnessed people come with shopping bags filled with bread, Usually very off bread- and the antics of birds like the Black-headed Gulls who are very partial to it seems to have rubbed off onto Valentino.  He's now got a taste for it himself. 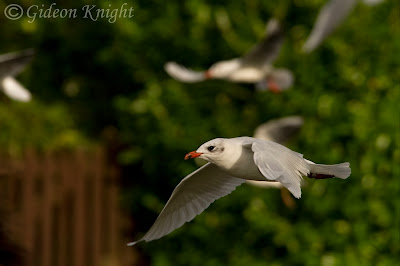 Although, he usually is the last bird to take up from the lake to come to the bread he still shoulders his way in when he's decided he's hungry.  Although trying to keep track of him is no walk in the park. OK yes it does involve walking in a park but you know what I mean, don't you?
And finally to top off this fantastic bird's story, Valentino seems to me to be a bird of habit. You see, the lake on which he resides is a bit bigger in scale to a football pitch.  However you would usually be wasting your time to scan the whole lake for him.  You see, save one occasion, every time I've seen Valentino on the lake he is on the east side.  And the last time he was within a twenty foot radius of where he was the time before. Even once taking bread he would return to the same spot.  Must be an age thing, I really hope I'm not like that when I'm fifteen. 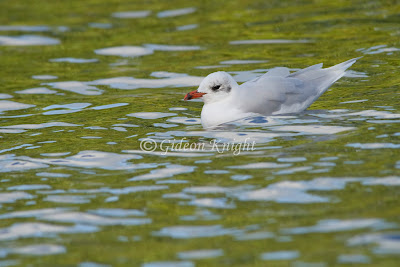 So now you know (hopefully) much more about Valentino, almost all there is to know. I would like to thank Peter Hopkins for the information he's provided.  It's been invaluable. I sincerely hope that you did not find this all that boring a read.  I rather enjoyed writing it.  It gave me a fantastic insight into Valentino's life.
Now I just need some good images.
Posted by Early Worm at 02:07