This morning I saw a Goldcrest in a big conifer in the next-door neighbours garden, the bird decided to stay deep in the bush, so I couldn't get a good view.

In the afternoon we went to Wanstead Flats to see if the Chats had stayed around.  As we were walking through Wanstead Park on the way to the Flats I spotted a soaring Sparrowhawk.

When we arrived at the Flats we saw mixed among a flock of Black-headed Gulls were Common and Lesser blacked-backs. We then headed over to the scrub in-between the "Golden Fleece" and the lake, here were meant to be Chats, or there was a few days ago, as we did not see any.  After searching the scrub land, the lake was next to be searched for anything good.  As we were walking around the lake I spotted a Kestrel fly over and hover not far away, it then came down and landed in the path only twenty foot away!  But as I tried to find it in the view finder a crow mobbed it and it flew only about three feet away from me! I was to surprised to get any of the close fly-by, but got some of it hovering. 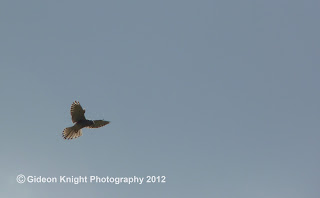 As somebody was feeding the birds bread, all the geese, Coots, Moorhens and Mallards came swarming over, tensions built, and it finally got too much for a couple of Moorhens, who broke into a fight.  A total list of 24 was achieved, not that much but it was fairly quiet. 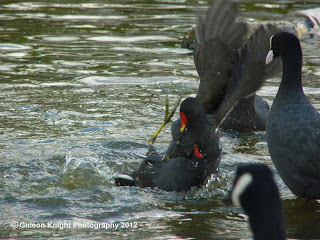