Yesterday was my Thirteenth birthday!  I got some great presents; my father got me a better tripod which is amazing!  My mother got me a replica of an Eagle Owl skull, from my brothers I got a huge bag of mealworms which freaked everyone out, probably the fact they were abnormally large; about 2-1/2 inches.

At about twelve I went with my mother and father to Pulborough Brooks nature reserve for the first time.  It was a forty minute drive during which I saw: Buzzard, Lapwing and  Pied Wagtail.
As we pulled into the reserve I saw  a Green Woodpecker.  At the feeders were Nuthatch; too fast and infrequent for pictures. Also Blue Tit, Great Tit, Chaffinch, Greenfinch, House Sparrow, Robin and Dunnock.  There was also a posy Dunnock outside the visitor centre.
As we were walking we came across a small group of people taking pictures, I though that they may have seen the Lesser-spotted Woodpecker, but asking one of them found it to be two male Bullfinches! They were a bit distant for god pictures so this was the best I could do. They kept hovering but I couldn't catch this un-obscured 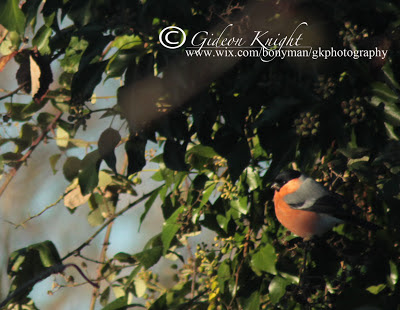 We came to the first hide: Netleys Hide, I saw loads of waterfowl; Teal, Widgeon, Shoveler , Mallard, Pintail, Mute Swan (no Bewick's), Lapwing, Grey Heron and loads of Black-tailed Godwits on the far shore.  There were a load of birdwatchers in the hide and suddenly they called Hen Harrier I looked and there in the distance was this raptor causing an up upsurge of Waders and ducks, my first Hen Harrier!  The distant record shot below shows the white (ringtail) of the female Hen Harrier, a good way to separate it from Marsh Harrier.
When we left the hide a Kestrel flew over! 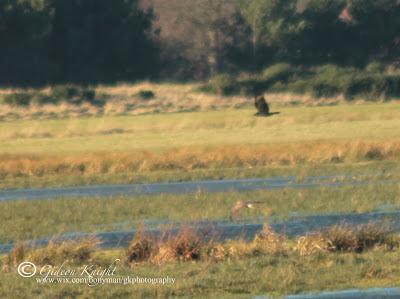 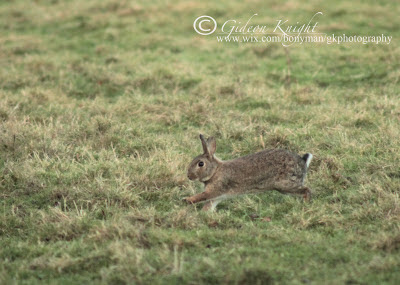 Probably my best action shot of a Rabbit, shame it was in the shade


In the next hide there was an amazingly close Lapwing! Close by Lapwing standard anyway; about thirty foot.  It was in some spectacular light! 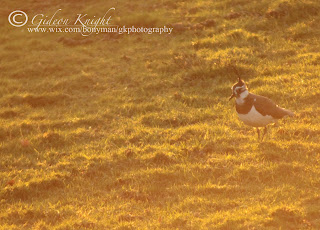 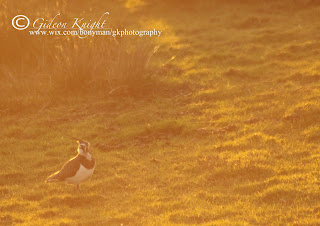 All in all a great day and would highly recommend the reserve, great wildlife, next time I come though I don't think I will bring my mother as she was a little bored!  The new Tripod was also brilliant!

Email ThisBlogThis!Share to TwitterShare to FacebookShare to Pinterest
Labels: Birthday