On Thursday (the 13th), we had a great bad days' birding.  The plan was to go to Shenfield station, here Iain would pick us up and take us to Costco Lakeside car park where 23 Waxwings had been seen the day before.  If that failed it would be the nearby Chafford Hundred where 100 had been seen.  We arrived, and drove around the car park for a while seeing nowt.  We parked up and headed around the car park on foot.  As we walked round a fellow birder pulled up to ask if we were here to look for them, we said yes and he told us he had been here for a while and also had been to Chafford Hundred and had seen no Waxwings at all!  So we probably had no chance.  Iain went to the main Lakeside complex and we walked over to B&Q.  As we were walking up to the building there was a crash as something hit the floor; something black went bouncing ahead of us.  As it stopped I realised to my horror that it was the teleconverter:  Somehow it had come off the screw thread.  I grabbed it and on first inspection; "Phew!", it seemed alright, but then a crack along the plastic/metal holding the lens in place showed up, there was also a rattling from within. Great, my zoom is now reduced from 30x to 18x and a replacement would cost at least £40.  After buying an Outdoor security lamp for my Grandmother Amy we were back out and saw some Redwing in a disused part of the car park. 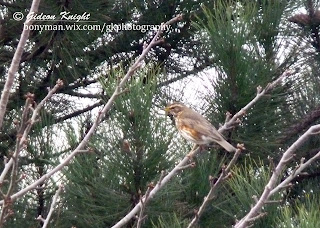 Heavily cropped
We walked around the back of Costco and my father pointed out a bird which turned out to be a warbler, not sure what kind.

Back at Amy's I took some macro frost images.

Oh, and I also managed to pull a muscle in my neck, A nice addition to the fact my Oyster Zip card stopped working and my father's Tivo (or something similar) Box needed replacing.
Today We went to the park, my neck is almost fine!  We saw Shoveler, Pochard, Tufted Duck, Mallard and Little Grebe and that is just some of the water birds.  Some Goldcrests were also seen.  A total of 29 species.