Had a stroll through Hyde Park again today.  We went the same way as last time and yet again there were Lesser-back-backed Gulls close enough to photograph, but this time they were showing some interesting behaviour.  One had caught a Feral Pigeon and brought it into the water where it was trying to kill it, for the pigeon was still alive.  The large gull came closer to the shore with its catch and soon the unfortunate pigeon had died. The Lesser black-backed shared its meal with its mate who seemed equally to enjoy it. 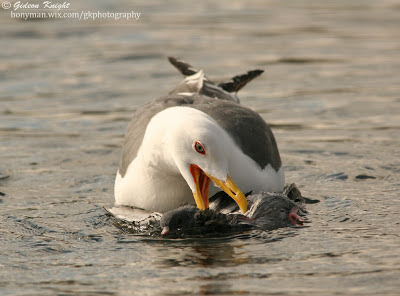 We moved, on crossing the bridge to have a look at the owls, who of course didn't show.  As we walked over the bridge I noticed this odd coloured Great-crested Grebe.  The orange around the head extended to the beak and over the eye, whereas a typical G-c Grebe would have a white patch here.  This bird also had a large crest, and the underside was a darker colour than usual, any ideas? 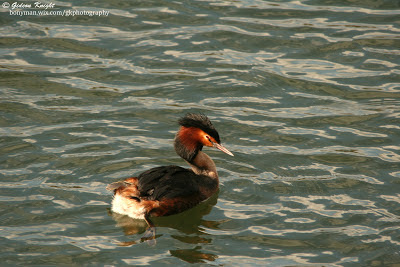 After looking for the owls I noticed a few crows collecting nesting material, one of them dropped his load and started cawing, so I decided to try and get a shot.  Where I set up (well sat down, I didn't have a tripod with me) I could fit the whole crow in the frame, but with some patience the crow approached so that only its head would fit in frame. 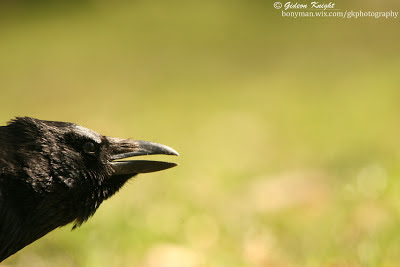 As Waxwings will soon be leaving the country we decided to have another crack at them. 17 had been reported at Forest Gate this morning, so off we went, and I know I keep doing this but if you are in any doubt about me not being a twitcher, please read this, as for one I know my cousin still thinks I am, despite having twitched a Spoonbill and Ring-necked Duck himself.
We arrived and yet again no Waxwings, we waited a while and still nothing, so we decided to walk around the block of houses where they were meant to be.  As we were walking I thought that I had heard a Waxwing over the din of traffic, we looked around but I couldn't be certain if that was, I then turned round and what was in the tree behind us?  30-35 Waxwing!  My second sighting this year, and the first with a DSLR.  Admittedly they were not very good for photography, sitting high up in a Silver Birch
I noticed that they were feeding on the buds of the birch.  Having only heard of them eating berries and fruit I thought this was quite strange.  In the quite long time that we were there they only visited the berry bushes twice - annoyingly these were behind a ten or so foot high wall. 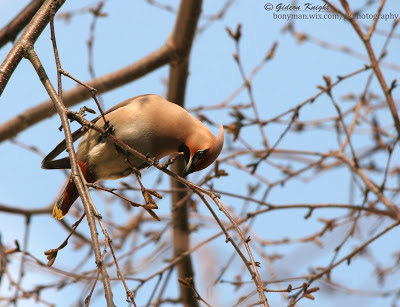 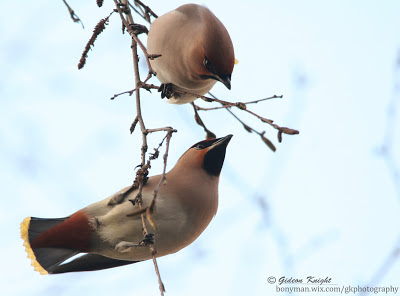 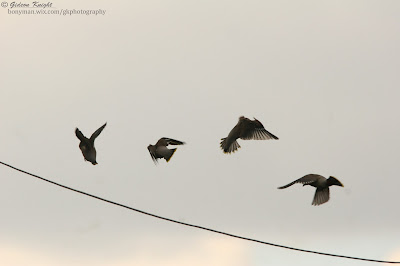 All in all a good day with some interesting behaviour noted, this included some Dunnocks at Moulsecoomb station: While waiting for a train I spotted two Dunnocks having a scrap on the other platform, they then flew over to our side, one landing on the platform not far off, before being chased by who I assume to be the alpha male.  They then flew behind us into the vegetation where they were followed by who I reckon was a female, the 'beta' male started singing close by while the alpha watched on.