Sorry for the delay on this, but better late than never as they say!

While we were in Taynuilt we visited Oban Harbour twice, and even after the second visit I could easily have gone back the next day.  To those of you who haven't been there that may sound a bit obsessive, but where else can you walk by within a couple of feet of Black Guillemots? Have a crowd of a dozen plus people staring at an Otter and it not being bothered?  And a once in a life-time experience was had there, and I doubt it will happen there again for a long time.  What was it?  A Sperm Whale, indeed a rare sight in British water with just over 90 in the last sixty years.
The first time we went was because we had heard about the Sperm Whale.  And shortly after arriving it came out of the water for a breath.  It stayed up for about five minutes before diving under.
We then decided to go and look for the Black Guillemots, a couple of which were courting in the water nearby.  Before we left a photographer gave me the helpful tip of stopping up the exposure by two stops so as not to burn out the white.  I spent about one-to-two hours photographing them and managed to get incredibly close.  I stayed flat on the ground to be level with the birds, and tried to catch their behaviour.  They are very characterful birds, giving their sad little calls to each other and bowing their heads, no doubt pairing up for the Spring.  Although you lose their little red feet by turning the image black-and-white, I prefer it with these two shots that way. 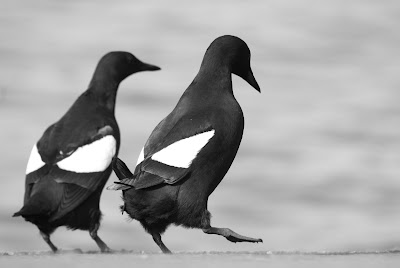 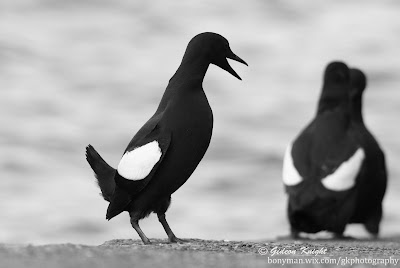 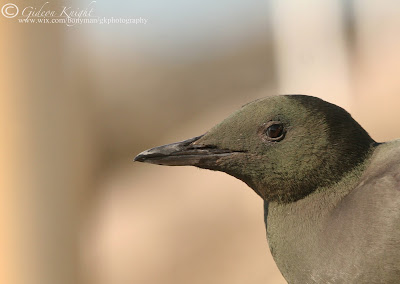 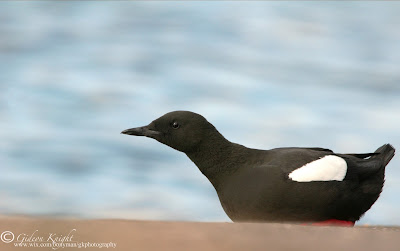 I kept the aperture at f/8 ISO 400 -so there's no noise- and as I was using Aperture Priority it sets the shutter-speed for you.  The problem I had was that the black,  red, and white of the birds against the dark blue water didn't come out too attractively. So I was pleased when this bird had a small pier for the background.  A railing is part obscuring the bird but I think it adds to the image. 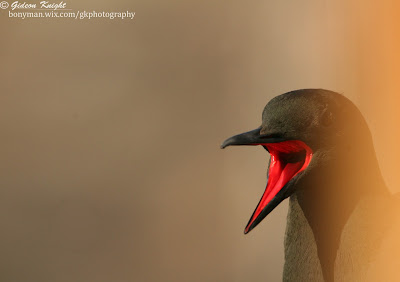 The whale was amazing!  Although only showing distantly.  I'm still quite happy with how they came out, I didn't however manage the cliche tail in the air shot! 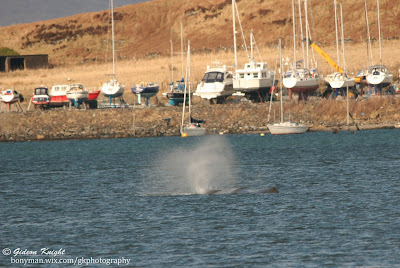 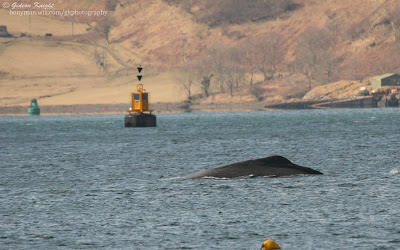 On our second visit there we had a look for an Otter which we had been told about, and the moment we arrived at the spot it was up!  Though it had soon disappeared.  As we were walking back there was a load of people looking over the edge and taking photos, and what was it they were taking pictures of? Who but the Otter!  It didn't seem bothered with the dozen or so people watching it, and in around half-an-hour it caught 2 fish, an Eel and two Crabs.  When it caught a crab it would come onto land to rip it apart, a lovely -for an Otter- Sea Food lunch. 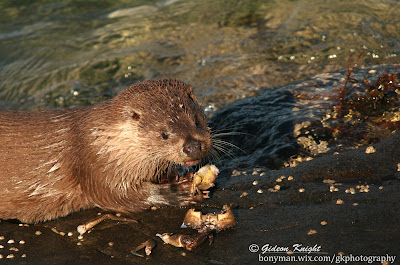 Another star of my trips to Oban was the Rock Pipits, there were no doubt more, but I only managed to count three.  While trying to sneak up on a Pied Wagtail -who flew off- I noticed a pair of these wee* birds running around, and managed my best shot yet of one!  But that was not the most memorable of the encounters, while sneaking up one another one I let the bird come to me, and come to me it did. It came close, veeery close. How does two foot sound? Way too close to focus so I just sat and watched! 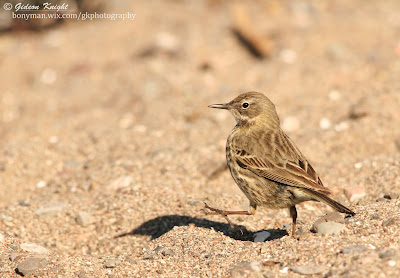 So now do you see why I like Oban harbour?  A photographers dream, or mine anyway!
I don't think I mentioned it in any of my other Scotland blog-posts, but in the whole time we were there  it was sunny, except for the odd cloudy evening, but not a drop of rain!

*You have to say wee instead of small when you are in Scotland. That's a rule, don't break it.
Posted by Early Worm at 13:34