I will continue with my Scotland trip over the weekend, but for now I will 'enlighten' you with a small blog from Brighton.
Now it has been a couple of months since I did anything from Brighton, and the reason being that not much has been doing.  But now with Spring on the way it should start to get interesting.
A couple of days ago I looked out my bedroom window and saw a Blue Tit with a beakful of moss.  Now on the wall, or should I say to the left of my window is a small hole.  I have noticed since early March that they have been checking it out as a possibility but I did not know whether it was deep enough to build a nest, but it must be as today the Blue Tit went in with some material for a nest.
Also a visit to Brighton beach showed 100+ Brent Geese moving West, along with several hundred Black-Headed Gulls.

Now you may not be, but there is the slightest chance that you may be thinking: 'How is this different? Birds again...', but here it changes... with a Fox!  And that's just for starters. 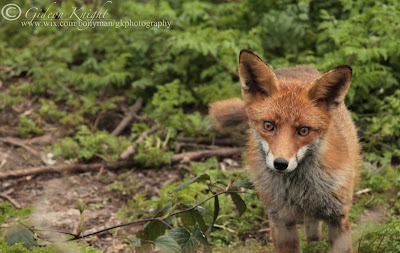 Foxes have been under pressure recently with people wanting a cull, but just look at those eyes, how could you want that sight removed?  It has also been suggested that they should be -Urban Foxes this is- moved to the countryside.  The problem with this is simple: the reason they colonise our streets is because we have removed a lot of countryside to be replaced by buildings, so they are not really the intruders.  It is also said that they are on the increase, however recent surveys show that this is not the case, foxes are in decline.

On a more positive note I saw my first Chiffchaff today, well I presume it's a Chiffchaff as they are the most common Warbler in my garden, and it looked like one, that means my year-list is on 123!  Better than I was expecting by this time of year.

After going shopping this afternoon (Scotland and Ireland completely ruined my boots) I came home to find that our cat Bernard had caught a Lizard and that my brother had had to fight her for it -I know a female cat called Bernard is a little odd- so I released it into the garden.  It came out of the bowl that it was in after 15 or so minutes and allowed me to take some pictures before it scuttled off.
I used a low f/stop so that the Lizard would stand out from the grass, and be in sharp focus.
The only editing done to these images is a slight crop, no lighting changes or sharpening at all! 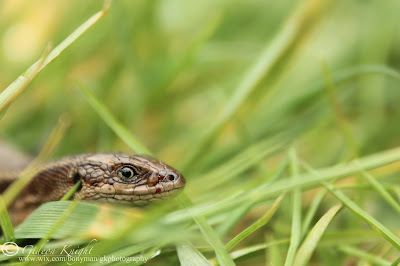 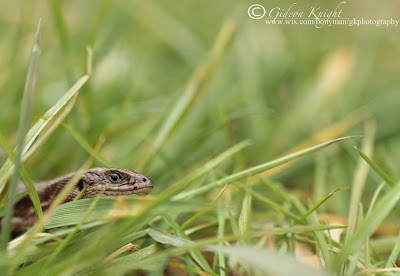 See no bird pictures, so it is slightly different.  Scotland will continue soon.
Posted by Early Worm at 11:03