I'm back from Ireland now, and have been for several days.  So again I must apologise for the late coming of this post.  However I have been slightly busy, and as they say better late than never.
Anyway, while I was in Ireland we decided to visit Cape Clear Islands.  This is apparently a migrant hot-spot.  Well I will confess that I didn't see particularly many migrants -unless you count the thousands of black dots out to see which are apparently Shearwaters.  However that doesn't mean it wasn't a good day out.  After I had assessed the situation I realised that it would be more of a photography day than a bird-watching day.  So I set about photographing Fulmars, or should I say trying to photograph Fulmars.  I did manage some, well, decent shots, nothing to write home about.  Except that I am writing about them.
Where stopped to do sea-watching there were cliffs on either side, and flying around these cliffs were Fulmars.  So after I realised sea-watching was impossible at that distance we climbed down the steep hill to get closer to the Fulmars.  And get close we did, at times too close. 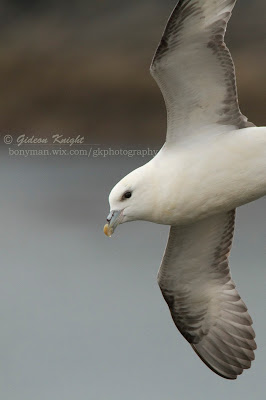 After you spend a while watching them you can begin to predict there flight patterns.  This helped a bit but I still didn't manage anything great.  Getting a focus on the head with a lens at f/8 isn't easy.  If you're a photographer you'll know what I mean. 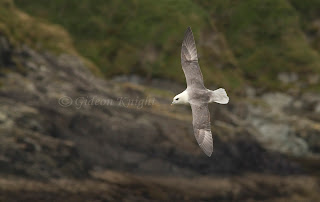 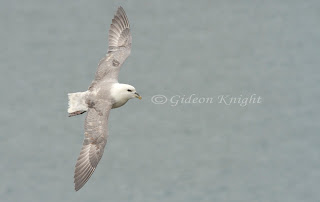 There were a few things of note though;  9 Chough, and my third species of Whale this year -Minke.  A distant speck surrounded by the even smaller specks of Shearwaters.  A Minke Whale nonetheless.  My seventeenth mammal species this year -yes, I am mammal year-listing, maybe it'll be the new trend?

Well, that's one blog done, a few more from Ireland still to come, and I have some new stuff to post too...
Posted by Early Worm at 09:42