They may be Humble...

... But Their Population's taking a Tumble.
House Sparrows are in decline.  Serious decline.  Since the 1970's more than 7 million have gone from the UK alone.  As I'm sure you can imagine this isn't good news.  However, according to BTO studies the decline has just slightly levelled off.  That on the other hand is good news.  But will it last?  The decline has largely been down to a lack of insects for the chicks when they are in the nest.  Primarily a lack of Aphids, a key food source for their nestlings.  Aphids too are having a hard time of it, what with the introduction of pesticides since the 2nd World War.  And, if you think of it, in the long run the House Sparrows decline is also down to these harmful chemicals.  So if you do use them in your garden, I would strongly advise that you stop, or get a more eco friendly one.

When my grandparents (on my fathers side) moved into their house twenty years ago the garden held a population of House Sparrows.  It did so for a few years after but then they were gone.  Vanished.  I know that there is a small population just a few minutes drive away, but in the close vicinity none.  So it came to a great surprise to all of us when last week we saw a male House Sparrow on the garden feeders.  The first Sparrow here in fifteen years.  Quite something.  The question then popped up though, will it stay?  If it does stay will it find a mate and breed next year?  These questions have yet to be resolved.  Hopefully the answer to both will be yes, but we will wait and see. 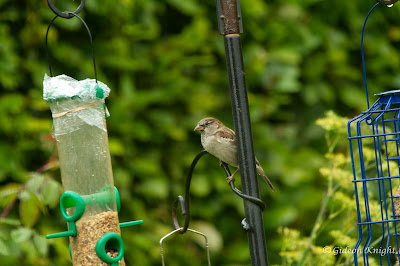 OK well the habitat is not perfect, the grass somewhat too short to hold a large enough supply of insects, but there are a lot of hedges for nesting and several gardens around there do feed birds throughout winter.  So there could still be hope for the Sparrows return to this neighbourhood. 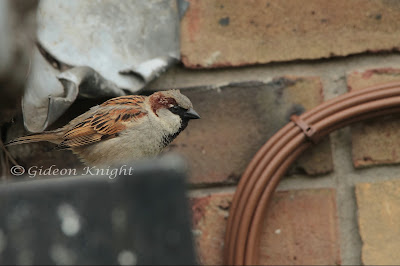