Calling all units, there has been a wildlife overload. That, to say the least was what happened on Wednesday whilst plans were being made for the next day.  A wildlife overload.  Now I knew we were going to Richmond Park for the Deer Rut, but little did I know of the other plan, and I'm sure little do you know of that plan also.  So it is that I must keep you in suspense until it will be revealed.  Which will naturally be after I have written a, small bit on the Deer. They did after all come first.

We left out at  6 O'clock -nearly on the dot, but not quite.  For the time of morning there was a rather surprising amount of traffic. Considerably more than I would have expected. Am I being naive to think that it was too early for your average worker to be on their way?
By the time we arrived the sun was coming up, but was concealed behind cloud.  So the red mist of dawn was a no go.  However the early morning light is a treat.  I haven't really been out photographing that early before, well at least not with a subject to stand in it.  And I would say I had a fairly willing subject.... 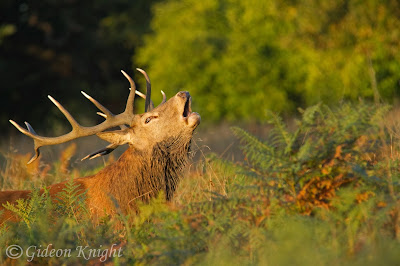 Unless my (somewhat small) skills of observation have failed, I will tell you with all sincerity that the above and below Deer at one point while we were there, rutted.  I will also allow you the knowledge that neither won the fight.  It was as far as a human could tell a draw. Both stood their ground. The same could not be said for the spectators of this fight -I among them.  The stags were pacing full of testosterone at fairly close range. We beat a hasty retreat.  I say spectators, for that we were, but that doesn't mean that there was a large group surrounding them. No. Just five photographers. 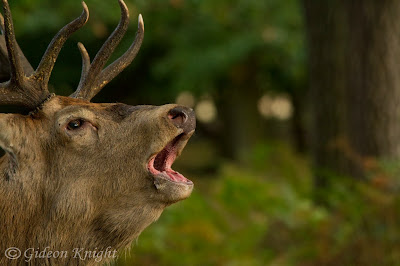 To make up for he lack of mist I tried some back-lit shots to show up the breath, better than nothing, and kind of mist.  This stag didn't seem to do anything but roar, so he wasn't bothered by me taking a couple of pictures of him. 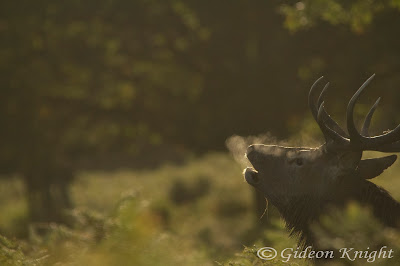 The title of this blog was not just in relation to me having a wildlife overload.  There's more to it than that.  Another hours drive and now it is time to reveal what else I was up to. 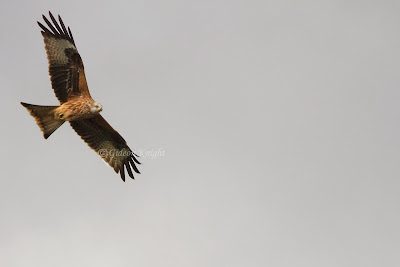 Oh yes.  Just look at that.  A real sight to take the edge off the cold of an open hillside.  It was still freezing though.  Rather than more words how would you like more pictures? 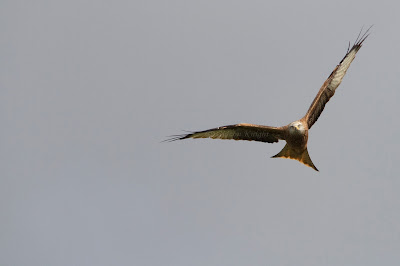 OK that's only one more, but that's about all I got which I still kept.  The weather you see was not preferable. For the most part the sun was hidden away, so colours were quite muted.  Oh well.

So now do you see the connection with the title?  If not I will give one more reason.  Just one.  Today I saw my first Redwing of the season, and there were lots.  So you see? Red alert?  Red Deer, Red Kite, Redwing.  Simple.

Hah, looking at how much I have so far written this looks to be on track for the longest post in a good few months.  So I hope you have actually read it all, or you may not have seen the connection, Code Red.