On Friday I was attending an awards ceremony in Suffolk -more of that later- so as I was in the area it would have been rude not to go birding wouldn't it?  And I must confess, it has to be one of the best days birding I've had for a fair while.  Just on the drive to Suffolk I had eight Kestrels, and a Buzzard, so not all that boring a way to spend an hour and a half.  And upon arriving at Lynford Arboretum -our location of choice- I heard my first ever Crossbills flying over.  Ten Minutes later a flock of five landed in a tree, as you may know Crossbill is, if you like, my bogey bird.  I can't believe it took so long to see one.  It did however make seeing one all that more rewarding, and to say the least enjoyable.
The only problem was, winter light doesn't last long, so I didn't have much time to try and get close to them.  As a result this poor record shot was as much as I could manage. 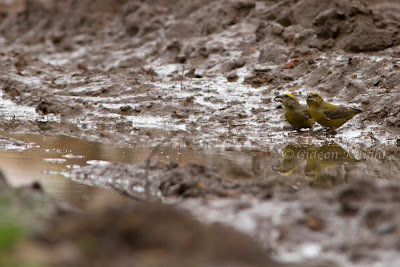 A walk to find the Hawfinches here was a waste of time, but when we got back to the area with the Crossbills someone got us on to a pair of these not so small beauties.  Despite the incredibly distant views, to see these chunky finches was incredible, something I doubted I would do for quite a while.  And a second life tick to the day was much appreciated.

However there is more to this story, it took a rather confusing turn when I saw this.  To an un-trained eye, like mine one would assume this a Two-barred Crossbill.  If only... 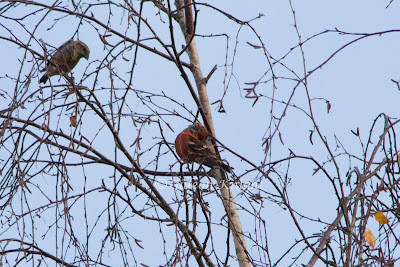 You see it's not all as simple as you would think at first glance, and if you have an experienced pair of eyes for this kind of thing you would know that this isn't a Two-Bar Crossbill.  The first reason it isn't is because, well I saw it.  And the chances of life-ticking Common and Two-bar Crossbill in the same day is... for the most part slim.
As you can probably guess the key feature in a Two-Bar is its wing-bars.  On this individual they were quite dull, not the 'stand out' bars a true Two-Bar would have.  The colour of the bird was also a bit of a give away, not quite the pink-red that it should be, and also the size, just a little bit too big.  I'm sure that there are probably various little details that I forgot to mention, but they're the keys things, I think
So after much discussion the verdict was that this was probably some sort of hybrid.  Could I tick it?  Certainly not.  However it was a rather interesting bird, and it got the mind working so it doesn't sit all that badly with me.  Although it did lie about its identity.... 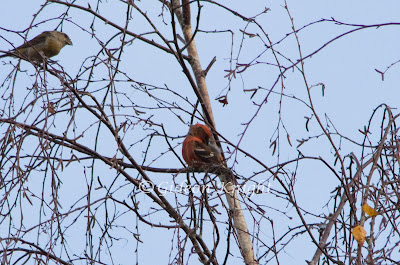