It's 2013!  And for the first time I decided to start a Year-list, which now stands at 27; I'm hoping for 150 at the end of the year!
On the 30th we went over the patch and set a patch record of 36!  One up on the last best!  The Nuthatch was at the feeders again but as the station that was further back from the path had no feeders on it had to come closer and oddly landed on the Peanuts and leaned over to eat seeds!
Coal Tit, Jay and a male Greater-spotted Woodpecker were the highlights.  The Canal area has been great for birds of late; with a flock of Goldfinches, with the odd Chaffinch, Greenfinch and Tits, no Brambling yet, Grey Wagtail is also almost a definite sighting.
The binoculars my mother and father got me for Christmas are great!  It's so easy to just quickly focus on something and have a bright clear image!
As we walked to the gates we were on 35 and couldn't find Little Grebe or Shoveler so decided to go by the wash on the off chance there might be a Pied Wagtail or something, instead we were rewarded with a tiny Wren who flew by and into a bush!  So we set our Patch record! 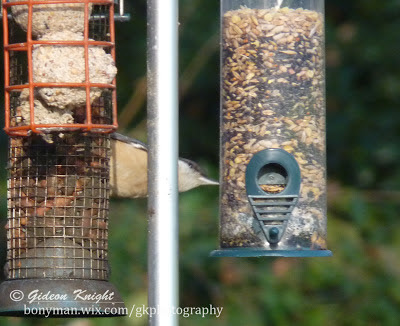 After a late night New-years-eve (1:30am!), I was up quite late, but we decided to go briefly to the patch and as it was New Years Day and bright there were loads of people.  Walking down the Canal we were greeted by the usual Goldfinch flock, but one bird that flew into a tree on its own caught my attention.  Looking through my binoculars I could see a bright yellow/green stripe on its back and streaked flanks led me to believe it was a Siskin,  I walked closer and the bird finally turned his head and confirmed it to be a male Siskin! A Patch tick!  It flew into another tree were I'm sure another Siskin also flew in but I couldn't locate them both

I just realised I had neglected to write about what happened on the 29th,  Iain and Amanda were going to Slough (Amanda's Grandma had sadly past on, she was in her nineties), Iain asked if we wanted to come as apparently there are some good places for birds round there.  We did some research and decided on Staines Moor, a great, bad decision.  We got out the car and walked down a path for 200 metres, we then turned down a muddy path seeing a few Mallards in a flooded field, a Wren, a flock of Long-tailed Tits and two Robins.  It was treacherous going; huge muddy puddles and eventually just where a wooden board-walk started was an impassable puddle, unless you have wellies!  I almost forgot to mention there was also a burnt  out Land Rover! 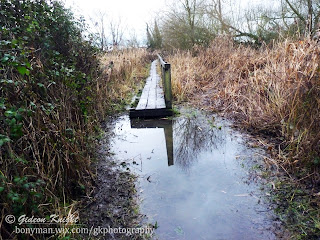 For Christmas my uncle Hamish and aunt Gillie got me a book called 100 Ways To Take Better Nature & Wildlife Photographs, reading this I've been intrigued by the techniques he uses for macro photography. I went outside this morning to photograph Lichen on a branch; as it was overcast I tried using a biscuit tin lid as a Silver Reflector to brighten the image,  as I was using slow Shutter-speeds of around 1/5-1/25.  I also used a leaf to give the image a more attractive background. 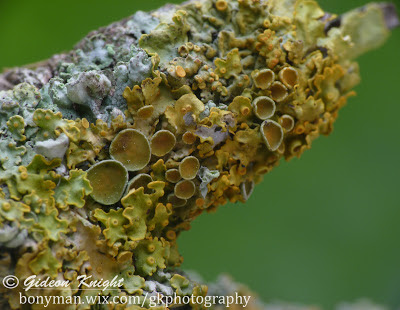