I came up to London from Brighton in the afternoon.  On the train journey I had yet again seen a Buzzard.

My new scope (which is hugely better than my old one) has an eyepiece too wide for me to make an adapter for digiscoping, so I ordered the Universal digiscoping adapter.  My Father had picked it up from the sorting office earlier, so what with reports of "Valentino" the Mediterranean Gull in the park for his 13th winter at the park, we headed out on a mission to see him.  We arrived, and to make it really "easy" to find him there were hundreds of Gulls everywhere.  On the lake where 4+ lesser Black-backed Gull, 2=Common Gull and 200+ Black-headed Gulls.  I scanned all over but no sign!  A full circuit of the "Boating Lake", plus loads of scanning still didn't produce the Med Gull.

Last Sunday the 14th, I was looking out my window in Brighton, when I noticed a Buzzard circling above.  A couple of minutes later a Kestrel flew in and mobbed it!  I still can't upload pictures to the internet from Brighton, so I won't be able to post the pics. 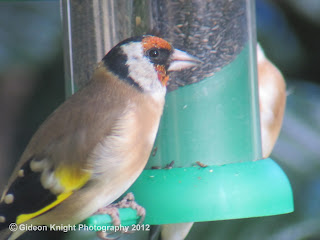