This morning at my Grandmother Amy's I saw a Buzzard!  I had been watching some distant Gulls when I noticed one of the birds was huge and was gliding with few beats as is common with B.O.Ps* so I took some shots to make sure before it went behind the trees.  The bird was too far away and I had a too-slow  shutter-speed, so I didn't get anything good enough to put up. Other birds of interest in and around her garden were: Great-Spotted Woodpecker, Jay and Sparrowhawk, as well as all the more common garden-birds.


In the afternoon we popped in to Thorndon for a couple of minutes as we were in the area.  The Nuthatch came down to the feeder for a few seconds after a while before flying off to a branch to break open the nut  It then came down for a good few minutes and I could get so close that the camera wouldn't focus at full zoom.  One day I will get an opportunity like this in good light but today was gloomy and it rained as soon as we left.

Also on the 8th down at Brighton beach I saw my first Gannet in England (as I had only seen them in Ireland previously). 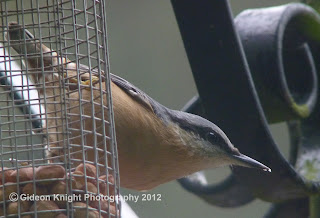 Here's a shot of one St James's Parks pelicans that I took last week. 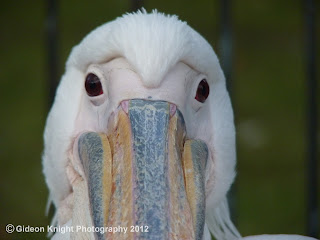