Outside my window here in Sussex flocks of wee birds come most mornings.  Yesterday a Goldcrest was among them!  Usually it's Long-tailed Tits, Blue Tits and Great Tits.  And on our garage roof, from a different window, there is almost always Blackbirds, just two days ago there were five! Along with 3 Chaffinches, a Wood pigeon and a Robin.  All had the same thought in mind (except the Robin), Water, they all needed to drink and bathe. 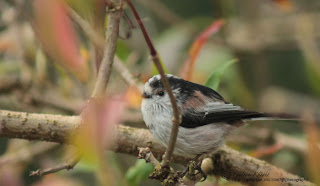 Fluffy Long-tailed Tit.
Also a couple of days ago two House Sparrows came outside my window, a male and female, and the female (or hen) had a tiny white feather in her beak! This is the first record in my back garden, I have seen them in my front garden once as well.  Oddly House Sparrows are always in a hedge a few roads up, yet they are rare visitors here, even the Firecrest has visited about twice (last year), and hopefully this November he will come back!

Underneath my window there is a little roof were our house sticks out, on this I placed some Black Sunflower seeds.  A Squirrel has been eating these and yesterday I spent about twenty minutes leaning out my window trying to get a decent picture, and I think I succeeded. 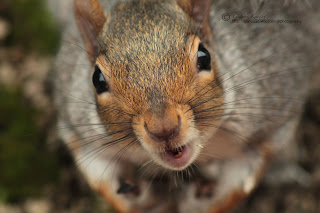 Yesterday I was on the beach for a few minutes and managed to find a Gull, which I believe to be a juvenile Herring Gull, that was ringed! 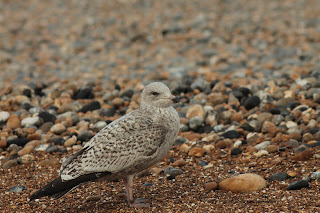 Later this afternoon I will be going up to London, and beforehand I may go up to the Golf-course.