After a Fireworks party last night I was not up until 8:50!  I mean thats almost the latest I've been up all year, any way I went to the park some time after ten.  First thing of interest was a male Sparrowhawk soaring up above being mobbed by a Carrion Crow and a Black-headed Gull.  I do not know why birds bigger than them like the gull, mob hawks, a female Sprawk can only take prey up to Wood Pigeon size, and the male is much smaller so why would a gull attack him?
The lake held a nice surprise, a Cormorant on one of the boats in the middle of the lake.  Also: Black-headed Gulls, Common Gulls and Lesser Black-backed Gulls.

At the feeder stations I saw two Collared Doves which made nice photos.  For this image I was only part the way zoomed in and used a fairly slow shutter; around 320/1 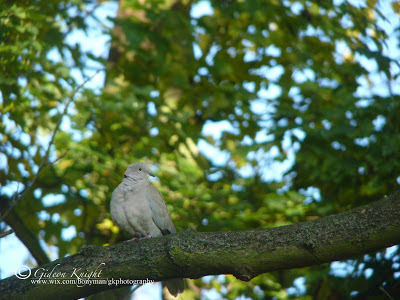 Also I came across this cheeky wee Squirrel,  he came right up to my tripod when I was right next to it and sniffed my scope!
Maybe he/she wants to buy one?  It would be helpful to spy out bird-food! 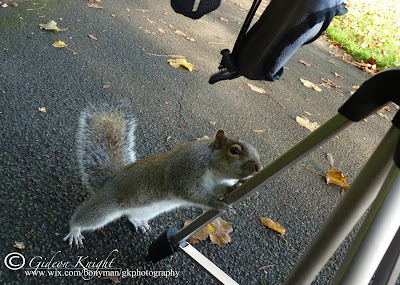 My record number of bird species for one trip to the patch is 28 which I set last week, today I got 27, missing out some usuals like: Jackdaw and Grey Wagtail,  hopefully I will soon get 30!