Early this morning while sitting with the cat watching the original Adam's Family (no-one else was up),  my attention was caught by a small bird in the Laurel, i looked and saw what looked like a small Great Tit, which meant one thing, the long awaited garden tick; Coal Tit! I stood up and reached for the camera, accidentally tipping the cat off my lap, fired off some shots before it came down closer to the feeder, it hanged on a branch and as I tried to focus I lost it.  After that I payed more attention to the garden.  I saw a movement in the small bush's around the pond, thinking it was one of the Chiffchaff's I took a few images; realised it was a Firecrest and took some more!  I climbed out the window barefooted (not even socks!) to get a better image, the Firecrest had by now moved and after that it was elusive   Due to bad light this was the best I could do. 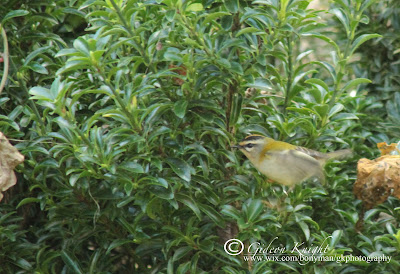 Later on I went back out (this time with foot-ware! and through the door) and straight away I saw the Coal Tit on the gate down to the back part of the garden! I snapped off a few shots but for a bird of its size it was to far away.  During the time I was out there a flock of Long-tailed Tits were about!  As well as a Chiffchaff.  After a while I got better views of the Coal Tit and some better images.  Unfortunately the computer is stupid enough to believe that the file doesn't exist.
So cut a long story short I got some good views of a Great-spotted Woodie!