Down in Sussex there has still been no further signs of the Firecrest, but as usual there are still plenty of other birds to keep me occupied; such as Goldcrests who are probably one of the only birds where sitting waiting patiently isn't usually the best idea.  I often end up moving from one part of the garden to the other just to get some shots; which are never that good.  I was quite lucky to get this shot, as this is the only conifer around, so the Goldcrests look more natural in it.  Goldcrests usually live and breed in coniferous  forests.
The Focus is a bit off as the lens wouldn't focus so I had to use manual-focus and the wee bird wouldn't stop moving for long! 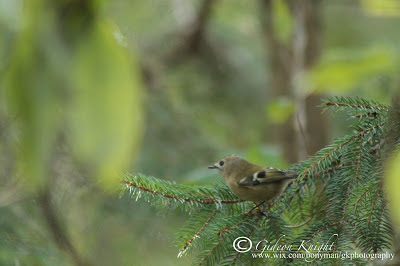 The Squirrel Buster+ feeder I bought is know working successfully, And my brother tells me that he has seen both Jay and Great-spotted Woodpecker, once both on the same branch!  So far I have only seen the Jay about the feeders, he usually hangs about on the floor below the feeders.
Recently whilst browsing lenses that I won't be able to afford for a long time; I discovered that with my mother's lens, when fully extended to 300mm the images are a bit "soft", but this can be counteracted by having a larger F-stop, such as F9, I usually work with F5.6 and have frequently lost great opportunities to "soft" images.  So yesterday I tried between F8-F10, and I believe some of the pictures may be a little sharper! 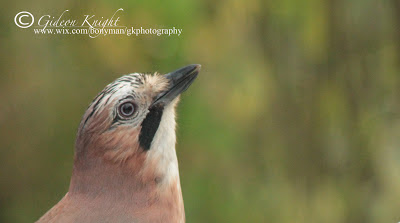 Yesterday whilst trying to photograph the Blue Tits bathing in next-doors gutter this Jay swooped in for a drink! at first I didn't take any pictures, I waited until he put his head down for water before I got into a good position, and when he looked up I fired off some shots! This image is cropped so as to remove the distracting white plastic/glass roof.  As I went to show this shot to my brother I noticed a Collared Dove (Garden tick) on the garage roof!  He too was having a drink!  Also some Blackbirds drinking from the gutter but I won't bore you with loads of drinking bird pictures. 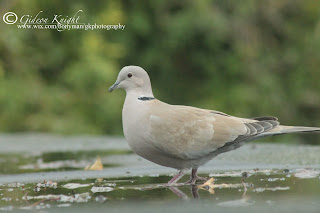 The Squirrels seemed to be dustbins today, I sprinkled some seed beneath my window and accidentally poured out way too much I also put out an old Brazil nut, all of this the Squirrels ate, and they still attempted to feed on my Squirrel Buster+, and searched all the empty feeders for food too!
I tried to focus on the eye in this shot, which was difficult as it kept putting its head to the ground, and this isn't cropped! 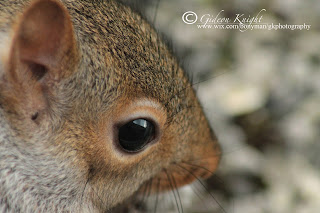