Here in Sussex the garden is hotting up with plenty of birds to see.  This what has been in the garden recently; most unusually I saw a Chiffchaff in the garden on the 5th!  Carrion Crows, Magpies, Jays, Jackdaws, Wood Pigeon and Herring Gulls have all been on the garage roof, unluckily since the Firecrest the flocks of Long-tails haven't come into the garden.  Also yesterday I put Black-Sunflower seeds out for the first time since spring, Birds came down within the hour, and there have now been: 5 Blue Tits 3 Great Tits and a Robin using the feeder!  Sadly there has also been another visitor. 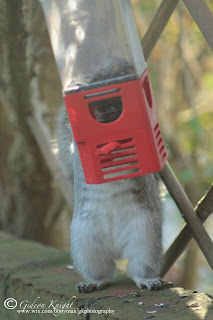 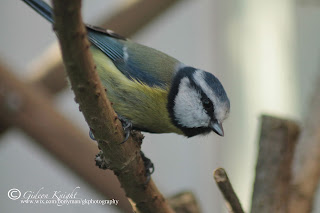 For the first time in months I went in the garden today, my reason for not entering this wilderness for so long is that it was full of Garden Spiders everywhere you looked, but they have basically all gone now!
I do not know why but I do not like spiders, except for Zebra-jumping Spiders, which I actually like!
Here is a picture of the only Garden Spider I found today 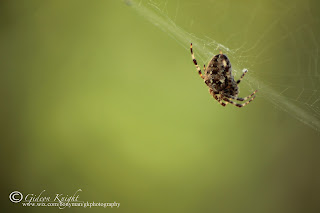 Typically, as I had already started writing this post when I went into the garden, and had complained about the lack of Long-tailed Tits in the garden, Long-Tails came!  I wasn't complaining as having Long-tailed Tits, a Chaffinch and a Blackbird as well as the Blue Tits was entertaining.  Also a Wren came creeping through the undergrowth!  I was outside for a fairly long while and saw a distant Great-spotted Woodpecker and a surprise was a Buzzard flying overhead being harassed by a Herring Gull.

This afternoon I saw a Red Admiral butterfly which I thought was odd for this time of year,  but I did see a Hoverfly yesterday, so there are still insects on the wing.