"Canvey" Really Be Seeing This?

Yesterday I went to West Canvey Marshes.  As well as my Father,  Uncle Iain came too.  We didn't leave until after eleven as some people came round to my Grandmother Amy's to fix her television.  It was very misty when we arrived and I had to use shutter-speeds under 1/320th of a second, which is horrible to work with.  In and around the car park and play area we saw Meadow Pipits, a Pied Wagtail, Chaffinches and my first confirmed sightings of a Fieldfare this season!
In the first hide there was little to be seen; most of the Water-fowl was up the other end of the water, and looking through my scope I managed to find a Med Gull!  It was super distant but I could see the distinguishing features: all white wings and heavier red bill.
On the way around to other parts of the reserve I saw this Robin who made quite a nice image against the mist. 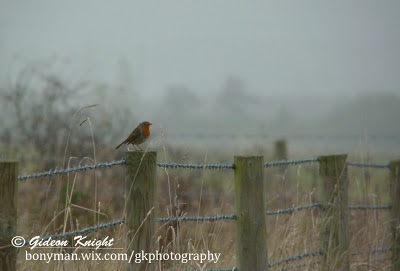 Also seen: Kestrel which Iain spotted, a flock of c.50 Stock Dove, a Little Egret, Blackbird and then as we were walking along the the path my father pointed out a small bird on the fence. I looked through my scope and was surprised to see a male Stonechat! (Life tick!) He was constantly flicking his wings and tail before diving into the reeds.  After he disappeared we carried on and then a Stonechat popped up just ten feet away - this was a female!  The pictures are rubbish due to low light, but I am pleased to have seen them! 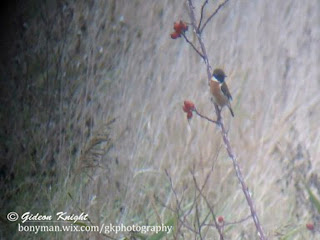 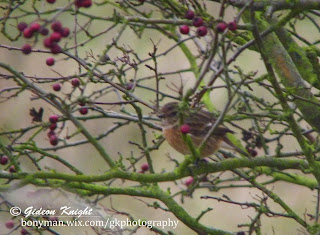 Also in one of the fields my Father pointed out a huge bird  on top of a tree, looking through his Binos' I thought Buzzard but, looking through my scope showed it to be a corvid (of the crow family).  Today I posted it on the Bird-Forum and had it confirmed as a Raven!

We carried on until we came to the Sea Wall, which was a bit disappointing because it certainly looked more like marsh than the Sea!  We walked along and saw a hovering Kestrel which I could tell was a male due to his blue/grey head, the female has a brown head.  He landed on a wire but was too far to get a decent image.  Carrying on the Kestrel kept taking off hovering and landing again on the wire, this he kept doing every time we moved, odd for a Kestrel to follow us!

By now Iain was a long way ahead and as we continued to walk he flushed a Pheasant which flew into a field.  I then noticed as the pheasant flew in,  he himself flushed something; I only got a glimpse but I called it: "Short-Eared Owl!" Despite my best efforts my Father couldn't see it, Iain came back to see what I was calling him for and then we were all treated to fabulous views of the bird which confirmed that it was a Short-eared Owl!  And there were at least two!  One of them flew up quite high and flew towards us showing amazingly! This was also a Life Tick!  I was extremely pleased to see these wonderful birds so well! 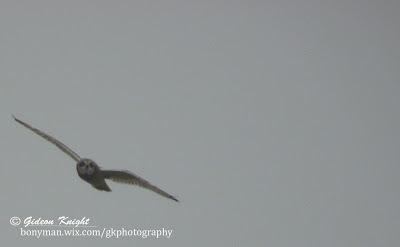 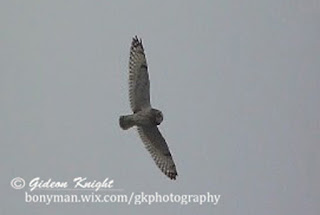 On the way back it started to rain so we went quickly to the last hide (the one close to the car park).  We got a lot of day ticks from here including a hunting Heron, who caught a tiny fish and I managed to find a Common Sandpiper!
Altogether a great day with two life ticks putting me up to 127 in my life list.  On the reserve we saw 40 species of bird!